Taking the fight to microplastics with lasers

First laser-drilled filter for the filtration of microplastics from wastewater 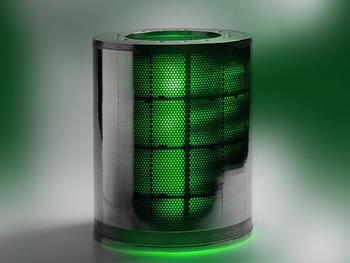 59 million holes in the filter plate of the first laser-drilled filter for the filtration of microplastics from municipal wastewater.

Until now, wastewater treatment plants have not been able to sufficiently filter out tiny microplastics in wastewater, but this could soon change: The first laser-drilled microplastic filter is being tested in a wastewater treatment plant. It contains sheets with extremely small holes just 10 micrometers in diameter. The technology to efficiently drill millions of such holes was developed at the Fraunhofer Institute for Laser Technology ILT, and now the institute’s engineers are scaling up ultrashortpulse (USP) laser technology in the kW range. Visitors can learn more about the microplastic filter and ultrashortpulse lasers at the Fraunhofer booth A6.441 at LASER World of PHOTONICS.

Today, sustainability is not an option, but much more an obligation no matter what technology is under development. Accordingly, the laser industry is increasingly using USP technology to improve sustainability in many projects. Lasers are already being utilized to boost the efficiency of hydrogen technology and to generate absolutely tight battery housings in electromobility applications.

In the BMBF-funded SimConDrill project, Fraunhofer ILT has joined forces with industrial partners to build a filter that – for the first time – can remove microplastics from wastewater. “At its core, our challenge was to drill as many holes as possible, as small as possible, in a steel foil in the shortest time possible,” explains Andrea Lanfermann, project manager at Fraunhofer ILT.

This has been achieved. After the process was developed at Fraunhofer ILT, experts from LaserJob GmbH drilled 59 million holes with a diameter 10 micrometers into a filter sheet, thus creating a filter prototype. The Fraunhofer researchers are also collaborating with three other companies on this ambitious project. In addition to the project coordinator KLASS Filter GmbH, LUNOVU GmbH and OptiY GmbH are also involved.

In the meantime, the laser-drilled metal foils have been installed in KLASS Filter GmbH's patented cyclone filter and subjected to extensive testing. In the first test, the fine powder from 3D printers was filtered from contaminated water. The setup is now being tested under real conditions in a wastewater treatment plant.

Process knowledge is the key

Drilling millions of holes one after the other takes time, but can be done faster with the multibeam process, in which a matrix of identical beams is generated from a laser beam via a special optical system. Fraunhofer ILT used this process with an ultrashort-pulse laser (TruMicro 5280 Femto Edition) to drill holes simultaneously with 144 beams. The basis for such applications is detailed process knowledge, which has been collected at Fraunhofer ILT over decades and implemented in corresponding models and software. Thanks to this expertise, parameters can be varied on the computer and optimum process parameters found quickly. The robustness of the process can also be analyzed before the application is tested.

In parallel to this drilling application, a consortium of six partners is working on how to best integrate a multi-beam processing system into an industrial machine. In the EU project Multiflex, researchers along with the industry are increasing the productivity of scanner-based laser material processing using multi-beam processes. The special feature of this project is that all partial beams can be individually controlled and, thus, used to produce any kind of surface structure. The project partners aim to increase the speed of the process by a factor of twenty to fifty, thus making the entire process significantly more cost-effective.

CAPS: Scaling into the kW range

Process knowledge is also a critical factor in further scaling up materials processing with ultrashort laser pulses with or without multibeam optics. When power is increased into the kilowatt range, thermal damage to the workpiece can occur. Such effects are explored through complex simulations, and processes can be adapted accordingly.

The laser systems for such experiments are available in the application laboratory at Fraunhofer ILT in Aachen. They are part of the Fraunhofer Cluster of Excellence Advanced Photon Sources CAPS, where 13 Fraunhofer institutes jointly develop laser beam sources, process technology and applications for USP laser powers up to 20 kW. A second CAPS laboratory is operated at Fraunhofer IOF in Jena.