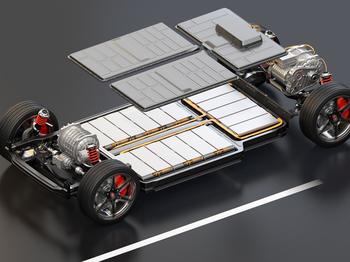 The development of resource-efficient manufacturing processes for next-generation battery anodes was the aim of the joint project „nextBatt“ funded by the German Federal Ministry of Education and Research (BMBF). At the Fraunhofer Institute for Organic Electronics, Electron Beam and Plasma Technology FEP, new material combinations and efficient production technologies have been realized for this purpose. The Institute will present recent results at SVC TechCon 2022, May 3 – 5 2022, in Long Beach/USA, at booth No. 436.

The demand for lithium-ion batteries (LIB) is growing rapidly. In 2020, the Fraunhofer Institute for Systems and Innovation Research ISI, among others, estimated that the request for lithium-ion cells will increase by a factor of 20 to 40 until 2030 just for electromobility.

To prevent the immeasurably increase for consumption of resources accompanied to the rising demand of LIB’s, scientists around the world are working feverishly on innovations.

In 2021 the project "nextBatt" made its individual contribution to mentioned endeavors. In addition to the Fraunhofer FEP, the "nextBatt" consortium was complemented by the capabilities of the Fraunhofer Institutes for Material and Beam Technology IWS, for Solar Energy Systems ISE and for Surface Engineering and Thin Films IST.

"In comparison to commercial systems, the energy capacity of lithium-ion batteries may be increased up to 65%." predicts Dr. Stefan Saager, project manager at Fraunhofer FEP. "This can be reached by replacing conventional graphite anodes with materials based on silicon and in perspective by metallic lithium. With the resource-efficient process technologies at Fraunhofer FEP, we have already succeeded in producing pure metallic lithium coatings and also lithium-silicon compound coatings at production-relevant scales."

Usually, lithium coatings are produced in the form of thin films by roll-to-roll-technologies, which also require the use of lubricants. At Fraunhofer FEP, however, the lithium coatings are produced in a thickness range of 1 – 20 micrometers by thermal vapor deposition in vacuum without any contaminating substances. This allows very pure and, above all, thin metallic lithium layers to be fabricated in a reproducible manner. In this process, lithium granulate is transferred to vacuum, filled into a crucible, and then heated to temperatures of 500 – 700°C. The lithium melts and finally it evaporates. Similar to the way water accumulates on lids of cooking pots, the propagating lithium vapor is condensed on a substrate. This substrate is moved in a well-defined manner over the lithium vapor source so that a lithium layer of a given thickness is condensed on it.

A big challenge during the technology development laid not only in setting up the processes, but also in the working environments, because lithium has an extremely high reactivity. Lithium reacts not only with oxygen in the air, but also with nitrogen. Furthermore, in contact with water it forms the strong alkali lithium hydroxide with the release of hydrogen. These reactions are known to be strongly exothermic, which makes them more difficult to handle and hence high standards for health and safety protection are required. Therefore, lithium can only be handled under an inert argon atmosphere. Furthermore, high-purity lithium layers are essential for achieving good battery performance. Fraunhofer FEP's facilities have been prepared adequately for experiments with air-sensitive materials such as lithium.

A major advantage of the technology is that the vapor deposition process can also be used to produce compound films in combination with other materials, such as silicon. To realize this, another vapor source with a different raw material is "easily" installed next to it. The different materials are mixed in the two superimposed vapor streams and a compound layer with the desired composition will condense on the substrate. In this way, very promising material combinations are reachable, which could not be produced in any other manner. In addition, very high deposition rates can be achieved with this process - an important criterion for converting the technology to mass production.

Up to now, the pure lithium coatings produced at Fraunhofer FEP have been investigated at Fraunhofer IWS with regards to their electrochemical properties. It was found that about 80% of the deposited lithium was electrochemically active – i.e. this material is available in a battery for chemical reactions to store energy. A further increase above 90% is reachable by optimizing processing steps. This improvement includes various processes for substrate cleaning and pretreatment, the coating technology itself, and refinement processes through post treatment. The reduction of so-called "dead lithium" is an essential key to increasing efficiency in batteries and this aspect is a currently subject of intensive international research.

At Fraunhofer FEP test and pilot plants are available for this purpose. With those, for example, metallic plates and strips or plastic films can be processed in an efficient roll-to-roll process. Other promising technologies for increasing battery performance are being developed in the project consortium. To name a few: processes for surface coating and processing of powders, metallization of plastic films for light current collectors or plasma processes for the production of alternative electrode materials. Due to the proximity to the partners, among other things, comprehensive characterization capabilities are applicable at the Fraunhofer IWS without having to consider long storage and transportation times of the sensible materials.