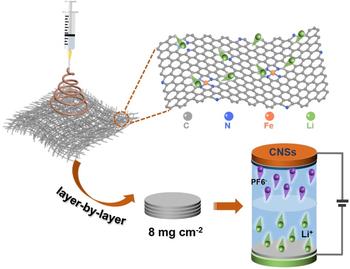 A new study by Chinese researchers demonstrates a novel approach to enhancing the storage performance of batteries and capacitors. The researchers developed a simple yet efficient way to produce a material with excellent performance for use in devices that rely on lithium-ion storage. They published their findings in Nano Research on April 1.

Energy storage technologies are increasingly important as the world shifts toward carbon neutrality, looking to further electrify the automotive and renewable energy sectors. Lithium-ion technology is critical to powering this shift. “Among all the available candidates, the energy storage devices employing lithium storage chemistry, such as lithium-ion batteries and lithium-ion capacitors, could deliver the best performance at the current stage,” says study author Han Hu, a researcher at the Institute of New Energy, China University of Petroleum.

However, the utilization of lithium-ion technology in energy storage is limited by its efficiency relative to size. A 2021 study cited by the authors asserts that to improve the market competitiveness of electric vehicles lithium-ion batteries must become more efficient by both weight and volume.  Further improvement in storage capacity may, therefore, be key to achieving carbon neutrality goals, rendering research on lithium-ion battery and capacitor performance via use of novel materials of paramount importance.

Carbonaceous materials doped with nitrogen are the current dominant choice in lithium storage batteries and capacitors, with electron and ion transfer the fundamental processes for electrochemical energy storage. However, because carbonaceous materials are nonpolar – with charges distributed equally across their molecules – the charged lithium (Li+) does not adhere easily to the materials, despite its unsaturated configuration that gives it suitable bonding energy.

The researchers, therefore, laced carbon nanofibers with iron (Fe) to regulate their surface chemistry towards facilitating increased electron and ion transfer. Using electrospinning, they produced a series of carbon nanofiber samples with Fe contents. They then evaluated the Li+ storage performance of the samples using a variety of electrochemical test methods. Scanning and transmission electron microscopy revealed a 3D interconnected network of smooth fibers with no clumps of iron particles, indicating that they were well dispersed.

The results revealed that adding atomic Fe changed the electronic structure of the carbon materials to promote more electrical conductivity as well as reduce the diffusion resistance of the Li+. The researchers explain that the electrochemical performance was enhanced mainly through a synergistic effect of the atomic Fe and the formation of an Fe-N bond that exposed more active sties to which Li+ could adhere. The outcome was improvement in lithium storage performance. The manufactured anode delivered sustained electric power through 5000 cycles of high current density, providing both high energy and large power density. Its interlaced fiber structure conferred structural stability and improved conductivity.

The study authors emphasize that the use of carbon nanofibers could bridge the gap between basic research and practical applications. They anticipate adoption of the novel material for use in a range of energy storage devices. “The electrospun carbon nanofiber mats are highly flexible, suggesting their possibility of constructing flexible and wearable energy storage devices,” says Hu. The carbon nanofiber mats would serve as the electrodes. Also, say the researchers, they aim to explore the use of other single atom metals sodium, potassium, and zinc for augmenting storage of electrochemical energy.