Finding lights a way for bottom-up controlling chemical reactions with lasers in the future – based purely on electrons, the “glue” of chemistry 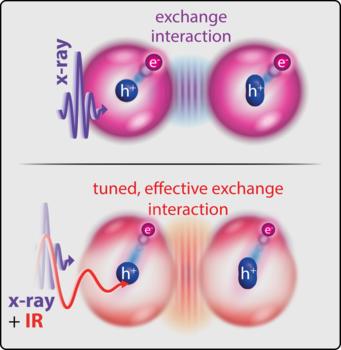 Exchange interaction between the electron (e-), excited by X-ray light, and the hole left behind in the spin-orbit-split energy level (h+ in circle or oval), without (top), and with (bottom), an infrared laser pulse that further drives the electron. 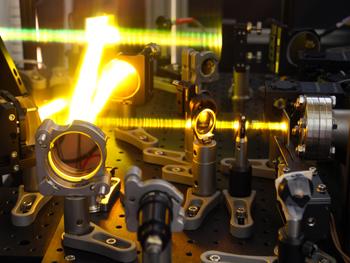 Visualised beam path of the experiment.

The quantum-mechanical exchange interaction between electrons, a consequence of the Pauli exclusion principle, can be specifically modified with intense infrared light fields on time scales of a few femtoseconds, as time-resolved experiments on sulfur hexafluoride molecules show. This finding lights a way for bottom-up controlling chemical reactions with lasers in the future – based purely on electrons, the “glue” of chemistry.

Electrons form the bonds in molecules and play a decisive role in chemical reactions. In atoms and molecules, the electrons are arranged on a sequence of energy levels that are characterised by quantum numbers. For their occupation, the interaction of these electrons with each other – quantum mechanically called exchange interaction – also plays an important role. This is because electrons behave like miniature gyroscopes: they have a spin that can point in two directions. According to the laws of quantum mechanics, several electrons of a molecule may never coincide in all quantum numbers, which is why electrons with identically aligned spin “get out of each other’s way”. This is the famous Pauli exclusion principle. Only electrons with opposite spin, on the other hand, can come closer to each other and form pairs.

The electrons in atoms and molecules can be excited with light, i.e., they can be raised from a lower energy level to a higher one. The position of the energy levels determines which colours of light are absorbed – and these are characteristic for the respective atom or molecule, giving rise to a unique fingerprint in spectroscopy. Usually, the electrons thereafter release this energy very quickly, for example in the form of light (fluorescence) or heat (motion of the nuclei). However, direct photochemical reactions can also take place from the excited state of the molecule.

Christian Ott’s group in Thomas Pfeifer’s division at the MPI for Nuclear Physics is working on specifically manipulating molecules with lasers so that they undergo a certain – and only this – reaction. Now they have succeeded in taking a fundamental step towards this goal with a tricky experiment and theoretical model that they have developed as part of the STRUCTURES Cluster of Excellence together with Maurits Haverkort’s group at the Institute for Theoretical Physics at Heidelberg University.

For the first time, the physicists realised a method to affect and measure the effective exchange interaction between several electrons bound in a molecule with two differently coloured laser pulses. Using soft X-ray light, they excited an electron deeply bound to the sulfur atom in a sulfur hexafluoride molecule, thereby extending its radius of motion to the entire molecule for a short time before it leaves the molecule. Due to the so-called “spin-orbit interaction” of the deeply bound electrons remaining there, the hole formed at the sulfur atom thereby produces a characteristic double structure of two lines measurable in the X-ray absorption spectrum. “Now, however, the exchange interaction of the excited electron with this remaining hole changes this double structure again,” explains Patrick Rupprecht, PhD student at MPIK and first author of the study.

Simultaneously irradiated intense infrared laser light now makes it possible to drive the excited electron even further in its movement: It is called “polarised”. As the study has shown, this leads to a modified effective exchange interaction with the hole at the sulfur atom. This showed up in the experiment as a characteristic change in the relative strength of the two lines and can be attributed to the symmetry properties of the electronic states involved. “In order to study exclusively the motion of the electrons, with negligible influence of the subsequent nuclear motion, we used an ultrafast technique with short laser pulses lasting only a few femtoseconds,” adds group leader Christian Ott. “The measurements demonstrate that the laser significantly influences the effective exchange interaction between the electrons involved – and that the degree of this influence can be controlled by the laser intensity.” Quantum-theoretical ab-initio simulations underpin the result, which points the way to using lasers as a kind of fundamental chemical reagents that directly address the quantum mechanical level of the bonding electrons.