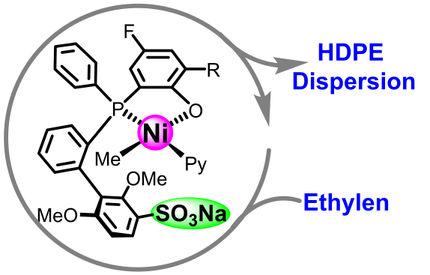 Chemists from Konstanz develop a new class of catalysts that enable manufacturing of polyethylene dispersions directly in water. This opens up perspectives for the environmentally-friendly, solvent-free production of plastic coatings.

Polyethylene (PE) is one of today's most important types of plastic. It is used in a wide range of everyday objects – from plastic bottles to pipes, ski coatings and toys. In the form of PE dispersions, it also forms the basis for different coatings and adhesives.

Professor Stefan Mecking and Dr Fei Lin from the Department of Chemistry at the University of Konstanz have now taken a big step closer to the environmentally-friendly, solvent-free production of PE coatings. In their recent article in the international edition of the journal "Angewandte Chemie", the chemists describe a new class of water-soluble catalysts that make it possible to manufacture PE dispersions directly in water. This eliminates energy-intensive intermediate steps in the production of solvent-free, emission-free coatings.

Because of their technical characteristics and their comparatively low production costs, plastics have become an essential industrial material. They are comprised of large, long-chain molecules that, depending on the type, can also be branched polymers and are composed of many repeat units formed from basic building blocks. In the case of polyethylene, the basic building block is ethylene – a gaseous hydrocarbon compound.

Suitable chemical catalysts are used to promote and speed up the polymerization process – in which the individual building blocks connect to form large polymer molecules. In the production of PE dispersions for coatings, polymerization usually is carried out in organic solvents that are gradually replaced by water, requiring additional steps that are both technically complex and energy intensive.

A new class of catalysts

Research and development are thus seeking options to produce PE directly during polymerization in the form of an aqueous dispersion. This could then serve as a basis for solvent-free and emission-free coatings in which only water evaporates during the film formation. However, it is challenging to polymerize PE directly in water. "This requires catalysts that are active in water but, at the same time, are not destroyed by water. Most of the traditional catalysts decompose once they come into contact with water", explains Stefan Mecking, Professor of Chemical Materials Science at the University of Konstanz.

Dr Fei Lin, a postdoctoral researcher in Mecking's research team and a Humboldt Fellowship Awardee, discovered a novel type of such a catalyst. The studies were performed in the context of Stefan Mecking's DEEPCAT project supported by an Advanced Grant by the European Research Council (ERC) since 2019 for the development of plastics that can be degraded in an environmentally friendly way. "We developed water-soluble catalysts for the polymerization of ethylene that not only remained stable but also highly active, although they were in direct contact with water during the entire chemical reaction", Fei Lin states.

In laboratory scale studies the chemists were able to demonstrate that, in water, their novel catalysts polymerize ethylene to form a large number of small PE particles with a high molecular weight and linearity – so-called high density polyethylene (HDPE). "This is decisive for the final characteristics of coatings produced on the basis of PE dispersions, and thus for the applicability of our method", says Stefan Mecking. The findings related to the novel catalysts thus open up interesting perspectives for environmentally-friendly polymerization processes in general and for the efficient production of solvent-free and emission-free PE coatings in particular.