New organocatalysts can compete with enzymes

Particular interest to the chemical and pharmaceutical industries 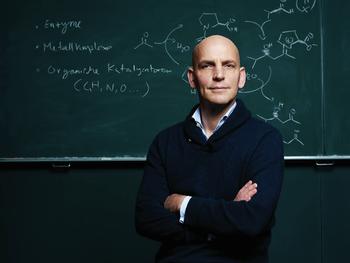 Organocatalysis not only provides an imaginable alternative to classical catalytic processes, but is even more efficient in many cases - and thus of particular interest to the chemical and pharmaceutical industries.

More than 20 years ago, Ben List and his Scottish colleague David MacMillan found out that, in addition to metal catalysis and biocatalysis, there is another general form of catalysis that is important for the selective production of molecules: organocatalysis. List and MacMillan were awarded the 2021 Nobel Prize in Chemistry for that finding. Thousands of scientists worldwide are nowadays working in this field. Recently Benjamin List and his team have shown in a new paper that organocatalysis not only provides an imaginable alternative to classical catalytic processes, but is even more efficient in many cases - and thus of particular interest to the chemical and pharmaceutical industries.

When catalysts are used in a chemical reaction, the "lock-and-key principle" plays an important role. In order to produce a certain molecule without unwanted by-products, you have to find a catalyst that fits exactly. This is particularly challenging in the case of chiral molecules, i.e. particles that consist of identical “ingredients” but are mirror images of each other. Since the effect of these mirror-image molecules can be completely different, scientists usually want to produce only one of the two variants.

For a long time, large enzymes were the method of choice here, especially for small molecules, explains chemist Hui Zhou, who works as a postdoc in Ben List's team. The complex biocatalysts are suitable by their nature to serve as tools for such targeted syntheses, she says. The research team led by List and Zhou has now succeeded in processing small ketones, using much simpler tools.

The product is of importance

The resulting product is of importance because it occurs in the synthesis of active ingredients and is therefore quite useful for the chemical and pharmaceutical industries. "Attempts have already been made in the past to produce this particular product, with metal catalysts, enzymes and other organocatalysts", Hui Zhou explains. But the selectivity had always been insufficient. Ben List and Hui Zhou have now succeeded in using newly designed organocatalysts to achieve a yield that is better than that of laboratory-designed metal, organocatalysts, or biocatalysts.

"We hope that our work will serve as an incentive for other scientists to create new catalysts," says Ben List, "organocatalysts that can definitely rival the high selectivity of enzymes."