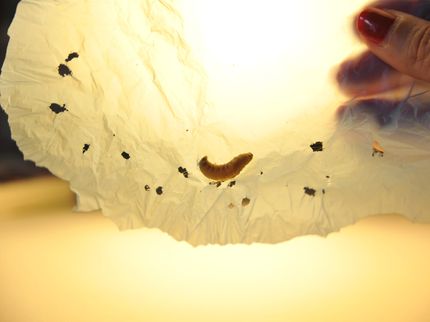 The wax worm degrades polyethylene thanks to enzymes present in its saliva.

A team of CSIC researchers has discovered that the saliva of the wax moth degrades plastic, which could have numerous applications in the treatment or recycling of plastic waste. This team discovered in 2017 that this species of worm (the lepidopteran Galleria mellonella) is capable of breaking down plastic (polyethylene), and now they have discovered how it does it: its saliva contains enzymes (from the phenol oxidase family) that initiate the degradation of polyethylene in a short time and at room temperature. These enzymes are the first and only known enzymes capable of degrading polyethylene plastic without pre-treatment, according to Federica Bertocchini, a CSIC researcher at the Center for Biological Research (CIB-CSIC) who led the study. The results of the work, pending review, have been published in preprint in the BioRxiv repository. The study was funded by the Roechling Foundation (Germany).

"To degrade plastic, it is necessary for oxygen to penetrate the polymer (in the plastic molecule). This first oxidation step, which normally results from exposure to sunlight or high temperatures, is a bottleneck that slows down the degradation of plastics such as polyethylene, one of the most resistant plastics," explains Bertocchini. "That's why, under normal environmental conditions, plastic takes months or years to degrade," adds the researcher.

"Now we have discovered that enzymes in the saliva of the wax moth perform this crucial step: they oxidize the plastic. Thus, they make it possible to overcome the bottleneck of plastic degradation and accelerate its decomposition," she adds.

Polyethylene is one of the most resistant and widely used plastics. Together with polypropylene and polystyrene, it accounts for 70% of total plastic production. Plastic pollution poses a threat to the planet's health and environment, so it is urgent to find solutions to deal with plastic waste.

One of the most promising areas of research with the greatest potential is the degradation of plastics using biological means. This process is known as biodegradation and is associated with microorganisms such as bacteria and fungi. However, to date, only a handful of microorganisms can break down the tough plastic polymers of polyethylene. And, in most cases, aggressive pretreatment is necessary to ensure oxidation and thus allow the microorganisms to have some effect (albeit slow) on the plastic.

A few years ago a new field of research opened up: it was observed that some insects of the Lepidoptera and Coleoptera genus were capable of degrading polyethylene and polystyrene. "In our laboratory we discovered the insect that seems to be the fastest of all: the larvae of the lepidopteran Galleria mellonella, known as wax moth," details Bertocchini. "These larvae were able to oxidize and break down the polymers in the plastic in a very short time (after barely an hour of exposure)."

"In recent years there have been attempts to find out how these insects manage to do something like this. Many studies have focused on the microorganisms that live in the digestive system of these worms, based on the assumption that the worms can use the plastic as food and that the degradation would be the result of their metabolic activity and the digestive process," recalls the researcher. "But this assumption is highly questionable, so our research has focused from the beginning on the oral cavity of the worms," she points out.

"We have closely observed the behavior of the wax moth in the presence of polyethylene and found that the enzymes present in the worm's saliva (i.e., the liquid collected from the insect's mouth) are capable of degrading polyethylene," Bertocchini maintains. "The polymer in contact with saliva oxidizes and depolymerizes within a few hours. We have identified degraded residues that form in the presence of their saliva," he explains.

In addition, this team of researchers has analyzed the saliva with electron microscopy and has observed a high protein content. "In saliva, we have isolated two enzymes that can reproduce the oxidation caused by the saliva as a whole," says the researcher. These two proteins, named Demetra and Ceres, belong to the family of phenol oxidase enzymes.

"We found that the Demetra enzyme showed a significant effect on polyethylene, leaving marks (small craters) visible to the naked eye on the surface of the plastic; this effect was also confirmed by the appearance of degradation products formed after exposure of the polyethylene to this enzyme; the Ceres enzyme oxidizes the polymer, although without leaving visible marks, suggesting that the two enzymes have a different effect on polyethylene," she summarizes.

Phenols are molecules that plants use as a defense against potential enemies, such as insect larvae. Therefore, insects could produce phenol oxidase enzymes as a way to oxidize plant phenols and thus neutralize them, which would allow them to feed on the plants safely. Phenols are also present in many plastic additives, which could make them targets for these enzymes and create the necessary conditions for plastic oxidation and depolymerization. "To date, this is only speculation and further experiments will be necessary to delve deeper into the mechanism of enzymatic action," the researchers caution.

Another even more interesting question is to find out how the wax moth acquired this ability. The researchers venture that it could be due to an evolutionary process. "Wax moth feed on hive wax and pollen from very diverse plant species. Considering that hive wax is full of phenols, this type of enzyme would be very useful to the worms. Indirectly, this would explain why wax moth can break down polyethylene. However, so far this theory is only speculation and more studies combining insect biology with biotechnology will be needed.