Method for measuring the conductivity of individual pharmaceutical and biological molecules 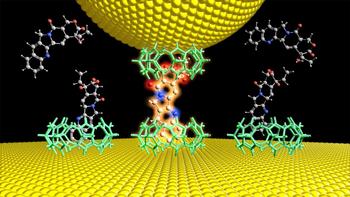 Gold electrodes (yellow) equipped with organic macrocyclic receptors (green) allow the capture of single drug molecules from aqueous solution (center) and the measurement and analysis of their electrical conductivity.

Controlling electrical signals using single molecules enables the miniaturization of transistors in integrated circuits down to the atomic level. This research area of molecular electronics not only paves the way for the next generation of ultra-powerful computers, but also for entirely new electronic systems and methods. The collaborating research groups at Jacobs University Bremen and China's Wuhan University of Science and Technology have now developed a method for measuring the conductivity of individual pharmaceutical and biological molecules.

The results of their recently published research work have been selected as a "Hot Paper" by the editors of the journal Applied Chemistry (“Angewandte Chemie"). The journal classifies the topic as highly relevant in a rapidly changing field of research.

In molecular electronics, single molecules are stretched between two electrodes to form an electrically conducting element in which molecular conductivity is then measured. Although the underlying method for this phenomenon, scanning tunneling microscopy, was awarded the Nobel Prize more than thirty years ago, a major limitation remains: To access molecular conductivity, the molecules to be measured had to be permanently attached to the inorganic gold electrodes, usually via sulfur bridges.

"We have modified the two electrodes in a way that we can not only determine the molecular conductivity of a single molecule. Rather, we are now able to exchange the compounds at will to measure the conductivities of many different molecules in succession," said Werner Nau, Professor of Chemistry at Jacobs University. His research group is dedicated to developing new physicochemical methods and advanced hybrid compounds for life and materials sciences.

In the new electronic measurement setup, both electrodes are modified with organic macrocyclic receptors so that solute molecules can attach to the junction and also detach. This is comparable to plug connections in electrical engineering. They allow electrical elements to be exchanged, for example to replace defective components or to incorporate those with different properties. "Put simply, we have succeeded in introducing electrical plug connections at the level of single molecules. We now use supramolecular instead of covalent bonds at the conducting site. This enables completely new dynamic measurements and effects," said Suhang He, one of the lead authors of the publication and a postdoctoral researcher at Jacobs University. The additional advantage of this approach is that native, unmodified molecules can be studied, so the invasive introduction of sulfur groups is no longer necessary.

In their first study, the German-Chinese team is applying the newly discovered supramolecular electrical connections in biosensing, among other things, for detecting biologically relevant compounds such as camptothecin, a drug used in chemotherapy. By measuring the change in electrical conductivity, for example, it has been able to show how individual drug molecules are protonated and deprotonated in the new electrical junctions. In physics and engineering, the new molecular electronic method has potential for advanced molecular computing applications. This is because it shows how the different properties of molecular conductors can be rapidly measured and tested.