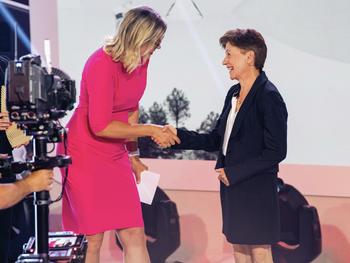 Claude Grison (FR), winner of the European Inventor Award 2022 in the category Research, at the hybrid award ceremony on 21 June 2022.

The European Patent Office honoured French scientist Claude Grison with the European Inventor Award 2022 in the "Research" category. The University professor and research director at the French National Centre for Scientific Research (CNRS) has developed a method of using plants to extract metal elements from polluted soil, and then using these elements as "ecocatalysts" to make new molecules.

Grison's method helps decontaminate soil and provides a new source of catalysts, which could be used to produce biodegradable plastics, antimitotics (used in cancer treatment), capped DNA and RNA, cosmetics and key intermediates for fine chemistry.

"Our Award recognises inventors that have demonstrated a new way of thinking. By marrying botany and chemistry, Claude Grison has found an original way to solve two problems simultaneously. First, her solution could help the chemical industry reduce its environmental impact. Then, she has tapped into a new source of raw materials highly valued by several industries, " says António Campinos, President of the European Patent Office.

Grison was honoured at the European Inventor Award 2022 ceremony, a hybrid event watched online by a worldwide audience. The Award is one of Europe's most prestigious innovation prizes and is presented annually to outstanding inventors from Europe and beyond who have made an exceptional contribution to society, technological progress and economic growth.

From botany to chemistry

Grison's invention was inspired by a question from her students as to whether metal-accumulating plants could be used to remediate old mining sites. She realised that if she could find a way to harvest the metal contained in the plants, it would open up a new source of materials such as zinc and nickel, which are used to make catalysts for the chemical industry. Few in the scientific community believed it was possible, but Grison was undeterred.

In 2011, she applied for a European patent for her method for extracting metals to produce catalysts, enabling her to commercialise her work. Grison and her team now use these "ecocatalysts" to produce new types of molecules for the chemical, pharmaceutical and cosmetics industries. So far, the team has synthesised 5000 such biomolecules, which they are starting to commercialise as well as a mosquito repellent with ingredients made by ecocatalysis.

Grison says that despite being a research scientist, she is motivated by the potential for her work to have an impact. "I do not want to be a mere researcher, I want to be a citizen researcher. I want my research to be useful, so that it can be transferred towards society, that it ends up contributing, even if just a little, to solving a big problem."