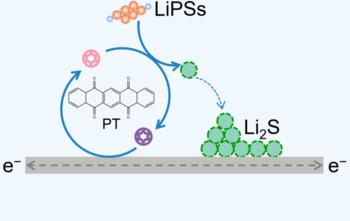 Lithium–sulfur batteries, with their ultrahigh theoretical energy density of 2600 Wh kg−1, are attracting great attention, as a possible alternative to the lithium-ion batteries. Besides their high-energy-density potential, the sulfur used as the active material in the cathode is naturally abundant, environmentally friendly, and low in cost.

However, there is a significant hurdle to overcome. The high theoretical energy density in lithium–sulfur batteries originates from the reactions between the sulfur cathode and the lithium anode. During the discharge process, when the chemical energy is converted to electrical energy, the sulfur is reduced into dissolved lithium polysulfides and then to solid lithium sulfide. But during this conversion process, the kinetics, or rate of the chemical reactions, is very sluggish. This sluggishness would be seriously aggravated under harsh practical working conditions.

To solve this challenge of the sluggish kinetics, researchers have designed a variety of promoters to improve the battery’s reactions. These promoters serve as sulfur hosts or interlayer materials in the lithium–sulfur batteries and are designed to promote the batteries’ kinetics. However, even with these promoters, the battery performance gradually declines because of solid lithium sulfide deposits that accumulate on the electrocatalytic active sites.

With further study, researchers have determined that soluble redox mediators are effective in promoting the kinetics. Redox, short for oxidation-reduction, describes the chemical reactions taking place. These redox mediators chemically reduce or oxidize the lithium polysulfides and then regenerate at the surface of the electrode. Researchers have proven that using the redox mediators is an effective mechanism for dealing with the sluggish kinetics in coin cell batteries. Coin cells, also called button cells, are small, flat batteries used in smaller devices like hearing aids, car keys, or medical implants. What was needed next was a redox mediator that worked in pouch cell lithium batteries, which are used in higher power applications, such as military and automotive applications.

The research team viewed it as urgent to develop an advanced redox mediator suitable for practical working lithium–sulfur pouch cells. So the research team designed a redox mediator using an organic molecule called 5,7,12,14-pentacenetetrone, or PT, to promote the sulfur redox kinetics in high-energy-density lithium–sulfur pouch cells. “Concretely, the PT redox mediator provides a chemical bypass for the reduction of lithium polysulfide to lithium sulfide, thus reducing the reaction resistance and improving the deposition capacity,” said Bo-Quan Li, an academic researcher at the Beijing Institute of Technology. The team’s work provides an effective redox mediator for polysulfide reduction with fast kinetics and verifies the application potential of advanced redox mediators in practical high-energy-density lithium–sulfur batteries.

Looking ahead, the researchers’ next step will be to develop more advanced redox mediators for full-range regulation on the cathode sulfur redox kinetics. With these advanced mediators, the lithium metal anode would be protected, either through electrolyte design or by introducing lithium hosts. “The ultimate goal is to realize high-energy-density and long-cycling lithium–sulfur batteries with low costs and high safety. The potential applications of such lithium–sulfur batteries might be aerial vehicles and spacecrafts,” said Li.