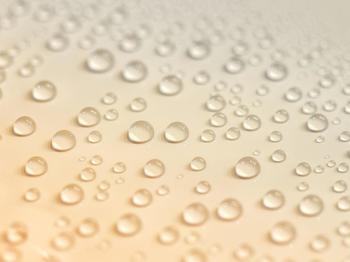 Back in 2019, Stanford University researchers and colleagues revealed the surprising discovery that hydrogen peroxide – a caustic substance used for disinfecting surfaces and bleaching hair – spontaneously forms in microscopic droplets of ordinary, benign water. Researchers have since aimed to flesh out how the newfound reaction occurs, as well as exploring potential applications, such as eco-friendlier cleaning methods.

The latest study has revealed that when sprayed microdroplets of water strike a solid surface, a phenomenon known as contact electrification happens. Electric charge jumps between the two materials, liquid and solid, producing unstable molecular fragments called reactive oxygen species. Pairs of these species known as hydroxyl radicals, and which have the chemical formula OH, can then combine to form hydrogen peroxide, H2O2, in minuscule but detectable quantities.

The new study further demonstrated that this process occurs in humid environments when water touches particles of soil as well as fine particles in the atmosphere. Those additional findings suggest that water can transform into small amounts of reactive oxygen species, such as hydrogen peroxide, wherever microdroplets naturally form, including in fogs, mists, and raindrops, bolstering results from a related 2020 study.

“We have a real understanding now that we didn’t have before about what is causing this hydrogen peroxide formation to happen,” said study senior author Richard Zare, the Marguerite Blake Wilbur Professor in Natural Science and a professor of chemistry in the Stanford School of Humanities and Sciences. “Furthermore, it appears that contact electrification yielding hydrogen peroxide is a universal phenomenon at water-solid interfaces.”

Zare led this work, collaborating with researchers from two universities in China, Jianghan University and Wuhan University, as well as the Chinese Academy of Sciences.

On the origins of the hydrogen peroxide

For the study, the researchers built a glass apparatus with microscopic channels in it where water could be forcibly injected. The channels formed an airtight water-solid boundary. The researchers perfused the water with a fluorescent dye that glows in the presence of hydrogen peroxide. An experiment showed the presence of the harsh chemical in the glass microfluidic channel, but not in a bulk sample of water also containing the dye. Additional experiments elaborated that the hydrogen peroxide formed quickly, within a matter of seconds, at the boundary between the water and the solid.

To gauge if the extra oxygen atom in the hydrogen peroxide (H2O2) came from a reaction with the glass or within the water (H2O) itself, the researchers treated the glass lining of some microfluidic channels. These treated channels contained a heavier isotope or version of oxygen, dubbed oxygen-18 or 18O. Comparing the post-reaction mix of water and hydrogen peroxide fluid from the treated and untreated channels showed the signal of 18O in the former, implicating the solid as the source of the oxygen in the hydroxyl radicals and ultimately in hydrogen peroxide.

The new findings could help settle some of the debate that has ensued in the scientific community since the Stanford researchers initially announced their novel detection of hydrogen peroxide in water microdroplets three years ago. Other studies have emphasized the major contributions of hydrogen peroxide production via chemical interactions with the gas ozone, O3, and a process called cavitation, when vapor bubbles arise in low-pressure areas within accelerated liquids. Zare pointed out that both of those processes also clearly yield hydrogen peroxide, and in comparatively greater amounts.

“All of these processes contribute to hydrogen peroxide production, but the present work confirms that this production is also intrinsic to the way microdroplets are made and interact with solid surfaces through contact electrification,” said Zare.

Nailing down how and in what situations water can transform into reactive oxygen species, such as hydrogen peroxide, has a host of real-world insights and applications, Zare explained. Among the most compelling is understanding the formation of hydroxyl radicals and hydrogen peroxide as an overlooked contributor to the well-known seasonality of many viral respiratory diseases, including colds, flus, and likely COVID-19 once the disease eventually becomes fully endemic.

Viral respiratory infections are transmitted in the air as aqueous droplets when people who are sick cough, sneeze, sing, or even just talk. These infections tend to spike in winter and ebb in summer, a trend chalked up in part to people spending more time indoors and in close, transmissible proximity during the cold weather season. However, between work, school, and sleeping at night, people actually end up spending about the same amount of time indoors during the hot weather months as well. Zare said the new study’s findings offer a possible explanation for why winter is correlated with more flu cases: The key variable at work is humidity, the amount of water in the air. In the summer, the higher relative levels of indoor humidity – tied to higher humidity in the warm air outside – likely facilitate reactive oxygen species in droplets having enough time to kill viruses. Contrastingly, in winter – when the air inside buildings is heated and its humidity lowered – the droplets evaporate before the reactive oxygen species can act as a disinfectant.

“Contact electrification provides a chemical basis for partly explaining why there is seasonality to viral respiratory diseases,” said Zare. Accordingly, Zare added, future research should investigate any links between indoor humidity levels in buildings and the presence and spread of contagions. If links are further borne out, simply adding humidifiers to heating, ventilation, and cooling systems could lessen disease transmission.

“Taking a fresh approach to disinfecting surfaces is just one of the great practical consequences of this work involving the fundamental chemistry of water in the environment,” said Zare. “It just goes to show that we think we know so much about water, one of the most commonly encountered substances, but then we’re humbled.”