New Insights into the Interaction of Topological Insulators 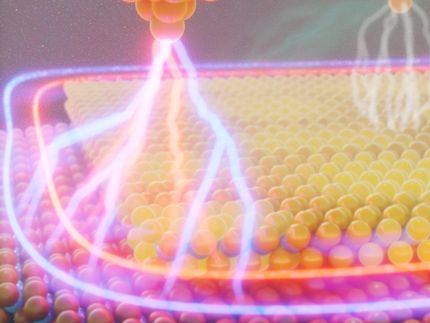 Tungsten di-telluride (WTe2) has recently proven to be a promising material for the realization of topological states. These are regarded as the key to novel "spintronic" devices and quantum computers of the future due to their unique electronic properties. Physicists at Forschungszentrum Jülich have now been able to understand for the first time how the topological properties of multilayer WTe­2 systems can be changed systematically by means of studies under a scanning tunneling microscope. The results have been published in the journal Nano Letters.

Topological insulators became known beyond expert circles thanks to the 2016 Nobel Prize in Physics. However, their research is still quite in its beginnings, and many fundamental questions remain unanswered. One of the distinguishing features of the compound WTe2 is that it exhibits a whole range of exotic physical phenomena depending on its layer thickness. Atomically thin layers are insulating on the surface, but due to their crystal structure they exhibit so-called topologically protected edge channels. These edge channels are electrically conductive and the conduction depends on the spin of the electrons. If two such layers are stacked on top of each other, crucially different interactions occur depending on how the layers are aligned.

If the two layers are not aligned, the conductive edge channels in the two layers interact only minimally. However, if they are twisted by exactly 180°, the topological protection as well as the edge channels disappear and the entire system becomes insulating. Furthermore, with a minimal twist of only a few degrees, a periodic superstructure, a so-called moiré lattice, forms, which additionally modulates the electrical conductivity. Researchers at the Peter Grünberg Institute (PGI-3) have now been able to study these properties locally on the atomic scale for the first time using a scanning tunneling microscope giving crucial insights into the interactions between the layers.