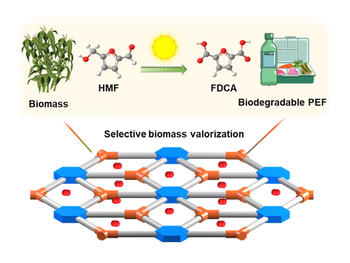 One possible replacement for drink containers made from PET is polyethylene furandicarboxylate (PEF), made from renewable resources. However, the production of the raw material for PEF from biomass is still rather inefficient. A new titanium-based photocatalyst could be about to change this, making it more economical to access the raw material for PEF from biomass, as a team of researchers report in the journal Angewandte Chemie.

In the valorization of biomass, the key chemical 5-hydroxymethylfurfural (HMF) is first obtained from the mix of natural substances. PEF is a recyclable plastic that can be produced from HMF. As PEF has very similar properties to PET, the most commonly used material for plastic bottles, it is used as a biobased replacement. However, the production of PEF is still expensive, due in large part to the difficulty in producing the raw material for PEF from HMF.

To produce the raw material for PEF, HMF must be oxidized, and this step is inefficient for two reasons. First, unwanted byproducts are formed during oxidation with atmospheric oxygen. In addition, the titanium-oxide-based catalysts available to date require UV light. Since UV light only makes up a small portion of the spectrum of sunlight, the efficiency of this photocatalytic reaction is low, making the process expensive.

A group of researchers headed by Ya-Qian Lan and Yifa Chen of the South China Normal University (SCNU) in Nanjing, China, have now developed a titanium-based photocatalyst that overcomes both obstacles. A titanium component in conjunction with an organic oxidizing group forms flat, crystalline nanosheets from an organometallic framework. By chemically linking the titanium with the organic components, the light absorption shifts from the UV to the visible range, considerably increasing efficiency, say the team.

The reaction is also highly selective, as relatively few reaction partners are required and virtually no waste is formed. The authors suggest that tailor-made photocatalysts like this could also be used to make a number of other reactions more sustainable.