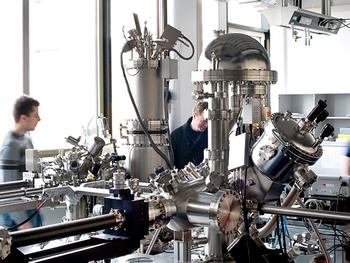 Ultra-high vacuum system at the Center for Nanotechnology (CeNTech) with a low-temperature atomic force microscope which is operated at five Kelvin, connected to a setup for photoelectron spectroscopy.

Fuel cells convert chemical reaction energy into electric power and heat. They are used, for example for the development of electric vehicles, in aviation and aeronautics or for sustainable energy supplies. During the conversion of energy, the catalytic reduction of oxygen plays an important role. Therefore, the development of efficient, inexpensive catalysts is extremely important. Researchers at the University of Münster have now made progress in the research field of single-atom catalysts. Together with colleagues at the Max Planck Institute of Colloids and Interfaces in Potsdam and at the University of Paderborn, they have developed a method which combines the atomic-scale characterisation directly with the electrochemical properties in the reduction of oxygen. In the future, this method will allow to design customised catalysts with an even higher efficiency. The results of the study have now been published in the journal ACS Nano.

Conventional catalysts often use expensive nanoparticles of gold or platinum. Because such noble metals are so expensive, attempts are being made to replace them with more inexpensive materials and use them in the form of ever smaller particles. For this reason, the research area of so-called single-atom catalysts has developed rapidly over the past few years. Here, the metal is not present in the form of particles but as single atoms which are held in place on a surface. “The advantage of this approach is based on the fact that these atoms have only very few bonding partners; this is also known as low coordination,” says Dr. Harry Mönig from the Institute of Physics at Münster University. “Accordingly, they display very high catalytic efficiencies, which basically means a higher gain and selectivity for a specific chemical reaction.” One significant problem in the development of such single-atom catalysts is the tendency of the single atoms to aggregate and form particles,which leads to more bonding partners and, as a result, to a loss of their catalytic efficiency.

For the study, the team of researchers used a highly ordered network through which they stabilised single copper atoms with very low coordination. “For this purpose,” Mönig explains, “we linked organic molecules on a copper surface to form a two-dimensional (supramolecular) network. As a consequence of an extremely strong interaction between the organic layer and the copper substrate, single copper atoms are extracted from the substrate to ‘hang’, flexibly suspended between the individual units of the network.” In a further step, the researchers examined whether these copper atoms showed any catalytic activity. To this end, they carried out various electrochemical experiments and accompanying simulations. Showing a robust reduction of oxygen, this approach allowed correlating the atomic-scale properties of the networks directly to their catalytic performance. The use of more inexpensive copper instead of gold or platinum as catalytic material could mean an enormous cost benefit for any technological application.

Back in 2018 the Münster University team of researchers in the laboratories at the Center for Nanotechnology (CeNTech) developed a new method which provided insights into funamental interactions between molecules. Using atomic force microscopy in connection with atomically defined probe tips, the scientists can image the structural and chemical properties of organic molecules with ultrahigh resolution. They now used this method to examine the two-dimensional networks with highest precision at the atomic level.