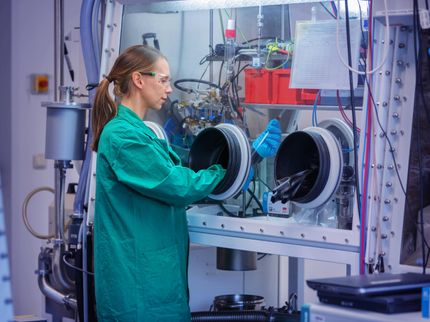 Dr. Juliane März at the glovebox. Here, she prepares a moisture- and oxygen-sensitive sample for analysis.

Discovered 25 years ago, metal-organic frameworks (MOFs) quickly gained the aura of a “miracle material” due to their particular properties: their large inner surfaces and tuneable pore sizes facilitate improved applications, for example in materials separation and gas storage. While previous representatives were mainly based on transition metals like copper and zinc, a team at the Helmholtz-Zentrum Dresden-Rossendorf (HZDR) has explored more exotic parts of the periodic table: they investigated analogous compounds with actinides as the inorganic component. In this way, they are helping, among other things, to promote the safe disposal of radioactive materials.

The Rossendorf scientists have thus laid the foundations for a platform for frameworks that can harbor a series of actinide metallic ions as the primary component, namely, thorium and uranium as well as the transuranics neptunium and plutonium. “Most of these elements in the last row of the periodic table are artificial. They are the product of neutron bombardment or a by-product in a nuclear reactor. In them, humans have created extremely dangerous substances because they are all radioactive and, in some cases, highly toxic,” explains Dr. Moritz Schmidt of HZDR’s Institute of Resource Ecology. “This also means that all our experimental work has to be conducted with special safety measures in place. Our workhorse is coordination chemistry or, in other words, creating metal complexes with predominantly organic molecules,” says Dr. Juliane März, expanding on the background at the team’s activities.

Within coordination chemistry, metal-organic frameworks are a relatively young field. The highly porous solids are composed of metals or metal-oxygen clusters which are connected on a modular basis by pillars of organic chemicals, creating networks of flexible cavities reminiscent of the pores of a kitchen sponge. Initially, research focused on the transition metals. “Good prospects for new applications soon led us to look at elements with complex electron shells – first of all, the rare earth metals and finally the actinides, too. But, as yet, almost nothing is known about transuranic elements that do not occur naturally, like neptunium and plutonium,” says März, sketching the chronology.

As an organic pillar they used chemically modified anthracene, a prominent example of polycyclic aromatic hydrocarbons. “We know that crystalline anthracene is the best organic scintillator: When energy-rich radiation passes through this substance it excites its molecules by collision processes. The excitation energy is emitted in the form of blue light. That’s why our frameworks are also luminous,” Schmidt reports. And they exhibit another special property: the width of their bandgap, which is a measure of the energetic difference between the valence band and the conduction band. “In the case of semiconductors at very low temperatures only the valence band has charge carriers; in this state it is non-conducting. When energy is applied, they move to the conduction band and thus trigger a flow of current. Measurements show that our new material is one of the so-called broadband semiconductors which play a role especially in power electronics and sensor technology. So, it might be usable as a detector for ionizing radiation – and the actinides we have built in deliver a constant internal radiation reference at the same time,” Schmidt is pleased to report.

Early investigations into MOFs by research groups worldwide synthesized representatives that exhibited ever larger inner surfaces and have therefore become alternatives to activated carbon and zeolites, for example in materials separation or catalytic processes. Their advantage is that their modular structure means that diverse network topologies can be implemented; moreover, the pore size can be very finely tuned by selecting an appropriate pillar for the intended application such as efficient adsorbents for a very specific chemical.

März and Schmidt have taken this a step further, adding a new facet with their work. They have identified applications in a field in which HZDR’s Institute of Resource Ecology conducts research: the safe disposal of radioactive material. The researchers are thus considering the development of a tailored waste matrix that immobilizes actinides in the scaffold and fission products in its pores.