Accelerator technology of the future 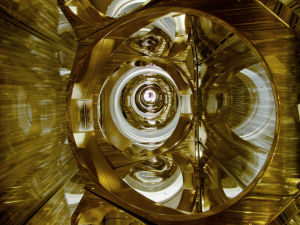 View inside one of the amplifiers of the PHELIX laser. 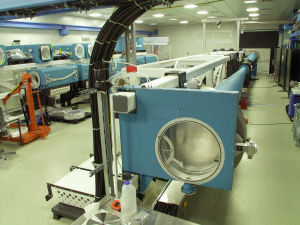 Telescope of the PHELIX main amplifier during the construction phase.

In a successful test conducted at the GSI Helmholtzzentrum a group of scientists used the PHELIX high-performance laser to accelerate hydrogen ions to about ten percent of the speed of light. This makes GSI one of the few research centers worldwide that can accelerate particles not only with conventional technology using high voltage electricity, but also with lasers. The test was carried out under the direction of a group of scientists from TU Darmstadt. Scientists now want to use the facility to investigate new accelerator concepts that combine the best features of both technologies. The aim is to subsequently employ such concepts in basic research and for applications in medicine and materials research.

The scientists taking part in the recent experiment directed an extremely powerful laser pulse onto a material sample. As a result, protons were expelled from the material. What makes the test unique is the fact that it was conducted in the central area of the GSI accelerator facility, and not just at the laser itself. This made it possible to inject the ions that had been pre-accelerated by the laser into the existing accelerator systems. In other words, it will soon be possible to combine the two accelerator concepts for the first time.

Over the last few years, lasers have been regarded as a promising tool for accelerating particles. However, this approach is still in the development stage. “One big advantage of lasers is that they allow us to save a lot of space, because their acceleration sections are very short. On the other hand, they also create certain challenges with regard to beam transport and focusability — challenges that don’t arise in this form when conventional accelerator beams are used,” says Thomas Stöhlker, who is in charge of the PHELIX laser at GSI and Director of the Helmholtz Institut Jena.

To better understand this approach to particle acceleration and make the resulting particle beams usable, the scientists have initiated a project called “LIGHT” (Laser Ion Generation, Handling and Transport). Besides the GSI Helmholtzzentrum and Technische Universität Darmstadt, the participants in the project include the Goethe University in Frankfurt, the Helmholtz Institut in Jena, and the Helmholtz-Zentrum Dresden-Rossendorf.

“The next step will involve focusing the laser-accelerated ion beams using a magnet coil and injecting them into a conventional accelerator system,” says Bernhard Zielbauer, the LIGHT project coordinator from the Helmholtz Institut in Jena. “This will make it possible to adapt the ion beam’s quality to the needs of the various experiments.”

The researchers want to make laser-accelerated ions available for a variety of applications in the future, including treatment of tumors and examination of radiation damage to electronic components designed for applications in space. As far as the latter are concerned, the new proton beam is particularly well suited because of its great similarity to solar proton storms in spectral terms. The scientists are now also planning to accelerate other types of atoms besides hydrogen ions.

One of the world’s most powerful lasers, the PHELIX (Petawatt High-Energy Laser for Ion Experiments) is capable of generating laser pulses with energies of up to 1,000 joules and outputs of up to half a petawatt. This output is a quintillion (1018) times that of a laser pointer or the laser in a CD player.

The GSI Helmholtzzentrum is currently the only site worldwide where particle accelerator facilities can be combined with such a powerful laser pulse.