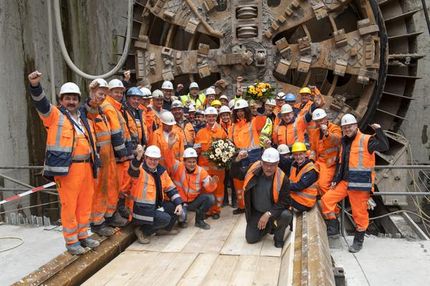 The workers celebrate the last arrival of the tunnel boring machine AMELI.

The European X-Ray Free-Electron Laser (EuropeanXFEL) reached an important milestone: the construction of the network of tunnels, which total nearly 5.8 kilometres in length and extend 3.4 kilometres from Hamburg-Bahrenfeld to Schenefeld in Schleswig-Holstein, is now finished. The 11 sectors of the underground facility were completed according to plan. With an investment volume of more than a billion euro – including 240 million euro for the construction of the tunnels and other underground buildings – the new international research facility is one of the largest scientific projects on German territory. As of 2015, laser-like X-ray flashes that enable completely new insights into the nanoworld will be generated in these tunnels.

Prof. Massimo Altarelli, Managing Director of European XFEL GmbH: “The construction of the tunnels is one of the most difficult building phases. We are glad that this task could be completed according to plan and that we could keep costs within the tight budget targets we set at the time the contract was awarded. We would like to thank the personnel of the participating construction companies for their good work. Their commitment helped us take a big step forward to reach our scientific goals. We scientists will do our part to make sure that this facility provides excellent research opportunities when it opens in three years.”

Prof. Robert Feidenhans’l, Chairman of the European XFEL Council: “Electrons will fly with almost the speed of light from DESY in Hamburg to Osdorf, where high-intensity X-ray flashes will be generated and then used in the experiment hall in neighbouring Schenefeld to gain new knowledge and ground-breaking insights. Scientists from all over the world and from diverse fields of research will carry out their experiments here. For this reason, I am convinced that Schenefeld will be an important location on the future world map of modern science.”

Dr Beatrix Vierkorn-Rudolph,head of the Subsection for Large Facilities, Energy and Basic Research, as well as the ESFRI Special Task, of the German Federal Ministry of Education and Research: “We expect great success for the life sciences, material sciences, and nanotechnology when research at the European XFEL begins. The just-completed tunnel connects not only Hamburg and Schleswig-Holstein but also scientists throughout Europe and beyond.”

Prof. Helmut Dosch, Chairman of the Board of Directors of Deutsches Elektronen-Synchrotron (DESY): “With the timely tunnel boring completion, we reached an important milestone for this unique research facility. A lot of earth and concrete work will now be followed by the installation of technical infrastructure and, finally, the accelerator components. These additional construction phases of the facility are now, so to speak, DESY’s core business.”

First, the tunnels will be equipped with the necessary infrastructure and safety devices. Then, the main components of the facility will be installed: the superconducting electron-linear accelerator, whose development, installation, and operation will be conducted by DESY, and the photon tunnels, undulator lines, and experiment hall, whose equipment and instrument installation will be led by European XFEL. By the end of 2015, scientists want to produce X-ray radiation for the first time here – eventually, up to 27 000 flashes per second, nearly 10 sextillion (1022) times brighter than the sun.

Tunnel construction began in July 2010 with the tunnel boring machine TULA (“TUnnel for Laser”). In January 2011, the second machine, AMELI (the German acronym for “At the end there will be light”), started to excavate the five photon tunnels leading into the experiment hall. This was a difficult mission: given the special layout of the tunnel, the 160 tonne colossus had to be repeatedly relocated and made ready for action. With the completion of the last section, the mission of AMELI has come to an end. Tunnelling with TULA was concluded in August of last year.