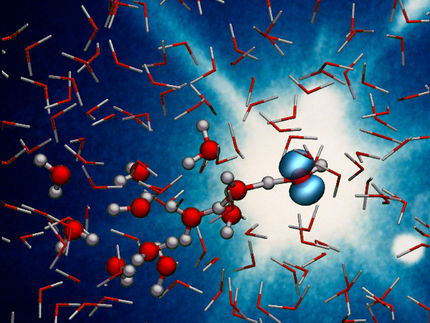 Using extremely short X-ray flashes, an international team of researchers has for the first time ever observed details of the ultrafast chemical reaction leading to the formation of aggressive radicals when water is irradiated. The study provides unprecedented insights into the process, which can lead to radiation damage in the body, but is also of considerable importance in other fields such as materials science. The researchers, led by Linda Young from Argonne National Laboratory in the USA, Zhi-Heng Loh from Nanyang University of Technology in Singapore and Robin Santra from DESY, present their work in the journal Science.

The study investigated the radiolysis of water, as scientists call the splitting of a chemical compound – in this case water – by radiation. “Our body consists essentially of water,” explains Santra, who is a Lead Scientist at DESY and Professor of Physics in the Cluster of Excellence Advanced Imaging of Matter at the University of Hamburg. “We are all exposed to ionising radiation in everyday life – whether through X-rays, natural radioactivity or, for example, cosmic radiation on air travel. Therefore, what happens here is of fundamental importance.”

In the radiolysis of water, high-energy radiation first knocks an electron out of a water molecule (H2O), thereby ionising it to H2O+. This is followed by a so-called proton transfer, in which the ionised water molecule releases a hydrogen nucleus (proton) to an adjacent molecule. This produces an extremely reactive hydroxyl radical (OH), which can cause damage in the organism, and a hydronium ion (H3O+). The process itself has been known for a long time, but how it takes place has not been observed in detail until now, partly because it is extremely fast.

“The truly exciting thing is that we’ve witnessed the very fastest chemical reaction in ionised water, which leads to the birth of the hydroxyl radical,” says Young. “The hydroxyl radical is itself of considerable importance, as it can diffuse through an organism, including our bodies, and damage virtually any macromolecule including DNA, RNA, and proteins.” A deeper understanding of radiolysis could possibly help to develop strategies to suppress the formation of the hydroxyl radical.

For the investigation, the scientists ionised water by laser and then took extremely short snapshots of the processes triggered by the ionisation, using the LCLS X-ray laser of the SLAC National Accelerator Laboratory in California. The X-ray laser allows for ultra-short exposure times of only about 30 femtoseconds (millionths of a billionth of a second).

The detailed analysis of the measurement data confirms the theoretical modelling of proton transfer done by Santra's team at the Center for Free-Electron Laser Science CFEL at DESY. “We could show that the X-ray data actually contain information on the dynamics of the water molecules that enable the proton transfer,” said Santra. “In just 50 quadrillionths of a second, the surrounding water molecules literally move in on the ionised H2O+ until one of them comes close enough to grab one of its protons in a sort of handshake, turning into hydronium H3O+ and leaving behind the hydroxyl radical OH.”

According to the observations, this proton transfer typically takes place in only 46 quadrillionths of a second. “Our recent work shows that the fastest chemical reaction in ionised water occurs on the 50 femtoseconds timescale,” summarizes Loh. “While 50 femtoseconds might already seem fast by most standards, within these 50 femtoseconds exist many physical processes that remain unobserved. The ultimate goal is to uncover the intricate network of physico-chemical processes that occurs in ionised liquid water, starting from the time that ionising radiation impinges upon water to the birth of the highly reactive OH radical.”