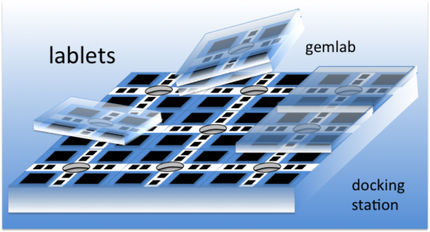 MICREAgent lablets equipped with autonomous electronics will self-assemble to form microscopic chemical reactors as pairs (gemlabs) or exchange information and chemicals on a docking surface.

First place in an EU competitive call on “Unconventional Computing” was awarded to a collaborative proposal coordinated by Prof. John McCaskill from the RUB Faculty of Chemistry and Biochemistry. The project MICREAgents plans to build autonomous self-assembling electronic microreagents that are almost as small as cells. They will exchange chemical and electronic information to jointly direct complex chemical reactions and analyses in the solutions they are poured into. This is a form of embedded computation – “to compute is to construct” – in which for example the output is a particular catalyst or coating needed in the (input) local chemical environment. The EU supports the project within the FP7 programme with 3.4 million Euros for three years. Four research groups at RUB will join forces with top teams across Europe, from Israel and New Zealand.

In order to create this programmable microscale electronic chemistry, MICREAgents (Microscopic Chemically Reactive Electronic Agents) will contain electronic circuits on 3D microchips, called lablets. The lablets have a diameter of less than 100 µm and self-assemble in pairs or like dominos to enclose transient reaction compartments. They can selectively concentrate, process, and release chemicals into the surrounding solution, under local electronic control, in a similar way to which the genetic information in cells controls local chemical processes. The reversible pairwise association allows the lablets to transfer information from one to another.

The lablet devices will integrate transistors, supercapacitors, energy transducers, sensors and actuators, and will translate electronic signals into constructive chemical processing as well as record the results of this processing. Instead of making chemical reactors to contain chemicals, the smart MICREAgents will be poured into chemical mixtures, to organize the chemistry from within. Ultimately, such microreactors, like cells in the bloodstream, will open up the possibility of controlling complex chemistry from the inside out.

The self-assembling smart micro reactors can be programmed for molecular amplification and other chemical processing pathways that start from complex mixtures, concentrate and purify chemicals, perform reactions in programmed cascades, sense reaction completion, and transport and release products to defined locations. MICREAgents represent a novel form of computation intertwined with construction. By embracing self-assembly and evolution, they are a step towards a robust and evolvable realization of John von Neumann’s universal construction machine vision. Although these nanoscale structures will soon be sufficiently complex to allow self-replication of their chemical and electronic information, they will not present a proliferative threat to the environment, because they depend for their function on the electronic circuit layer that is fabricated as part of their substrate.

For the project, Prof. Dr. John S. McCaskill (Microsystems Chemistry and Biological Information Technology) collaborates with Prof. Dr. Günter von Kiedrowski (Bioorganic Chemistry), Prof. Dr. Jürgen Oehm (Analog Integrated Circuits) and Dr. Pierre Mayr (Integrated Digital Circuits). McCaskill’s and von Kiedrowski’s labs at RUB have already joined forces in previous European Projects forging a path towards artificial cells. The ECCell project, for example, that finished in February this year, has laid the foundation for an electronic chemical cell. There, the electronics and microfluidics were exterior to the chemistry: in MICREAgents this is being turned inside out.