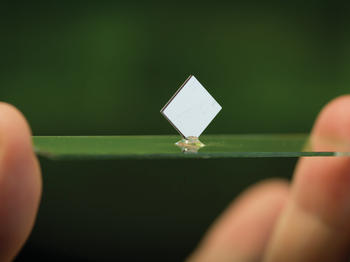 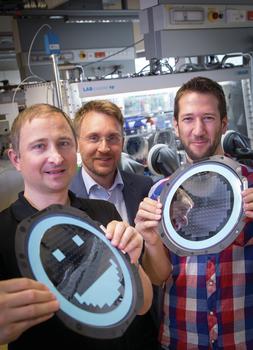 Michael Sternad, Martin Wilkening and Georg Hirtler (from left to right) research successfully at the CD-Laboratory for Lithium Batteries at TU Graz

Electrochemists at TU Graz have managed to use monocrystalline semiconductor silicon as an active storage electrode in lithium batteries. This enables an integrated power supply to be made for microchips with a rechargeable battery.

Small electrical gadgets, such as mobile phones, tablets or notebooks, are indispensable accompaniments of everyday life. Integrated circuits in the interiors of these devices monitor, control and regulate the most varied processes. A ubiquitous trend in microelectronics is towards the smaller, more mobile and more diverse. And this shows how important the research results published inScientific Reports by the research team led by Michael Sternad and Martin Wilkening from the Christian Doppler Laboratory for Lithium Batteries at TU Graz’s Institute for Chemistry and Technology of Materials are. The on-board power supply of a microchip could definitely extend the range of applications of microelectronics.

One result of the many years of basic research at the CD Laboratory for Lithium Batteries at TU Graz shows how monocrystalline silicon, which the microchips consists of, can be used directly as a battery electrode (anode). Thus the microchip not only houses the electronics, but is at the same time an important part of a mini battery providing electrical energy, e.g. for sending and receiving information. “Normally you cannot use single crystalline silicon as a battery component on its own because it expands considerably when implemented with lithium, starts to crack and is gradually destroyed,” explains Michael Sternad, researcher at the Christian Doppler Laboratory for Lithium Batteries at TU Graz. “We use the doped semiconductor silicon of the chip directly. However, it is first carefully microstructured using a knowledge of the crystal axes and then electrochemically specially activated,” explains Michael Sternad.

Besides the enormous storage capacity (more than 1000 mAh/g) and a high power efficiency (Coulomb efficiency >98.8 %) of the silicon electrode, what was especially surprising for the researchers was the fact that the small silicon towers of which the anode of the lithium battery consists withstand more than a 100 full charge and discharge cycles with loss of capacity of only a few per cent. Thus the electrochemical service life of the micro battery outperforms the average period of use of a sensor or a probe. Martin Wilkening, head of the Institute for Chemistry and Technology of Materials and the CD Lab for Lithium Batteries, is very enthusiastic about this mini power station: “The micro battery is only a few millimetres big and achieves performances which can compete with today’s best available Li-ion battery systems. Moreover, several thousand cells can be produced in parallel on a semiconductor silicon wafer, so that unit prices of only a few cents would be achievable.”