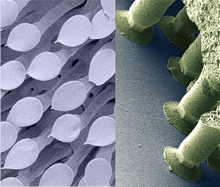 Image from a scanning electron microscope of the mushroom-shaped adhesive structures of a male leaf beetle (left) and of the Gecko®-Tape (right), which is inspired by the beetle’s adhesive elements.

Detachment of two differently microstructured adhesive tapes. Although similar crack propagation at the global scale is observed, illustrated by the background shading from bright (detachment) to dark (attached), crack propagation is completely different at the local scale (see shading of individual structures). (a) In the flat punch contact geometry adhesive failure starts at the perimeter due to edge stress concentrations (see inset). (b) In the mushroom-shaped contact geometry the thin contact plate eliminates the edge stress concentration leading to a homogeneous stress distribution (see inset) changing the adhesive failure mode. 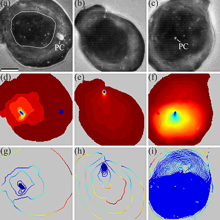 Adhesion is an extremely important factor in living nature: insects can climb up walls, plants can twine up them, and cells are able to adhere to surfaces. During evolution, many of them developed mushroom-shaped adhesive structures and organs. Lars Heepe and his colleagues at Kiel University have discovered why the specific shape is advantageous for adhesion. The answer is in homogeneous stress distribution between a surface and the adhesive element.

Not only the roughness of contacting surfaces but also their contact shapes, also called contact geometry, determine adhesion strength between them. In nature, mushroom-shaped contact geometry prevails. It evolved in diverse terrestrial and aquatic organisms independently – at the nano, micro and macro scale. Examples are among others the bacteria Caulobacter crescentus that clings to surfaces (nano scale), the mushroom-shaped hairs of specific leaf beetles (micro scale), and the Virginia creeper plant (Parthenocissus) (macro scale). “This particular contact geometry developed independently in various living organisms. This fact might indicate an evolutionary adaptation of organisms to optimal adhesion”, says Stanislav Gorb, biologist at the Institute of Zoology at Kiel University.

However, it remained unclear what are the mechanical advantages of the mushroom shape. In order to answer this question, an interdisciplinary research team including engineering physicist Lars Heepe, biophysicist Alexander Kovalev, theoretical physicist Alexander Filippov and biologist Stanislav Gorb took a closer look at the so-called Gecko®-Tape – an adhesive developed at Kiel University in collaboration with the company Gottlieb Binder GmbH & Co. KG. Its microscopic adhesive elements were inspired by gecko feet and leaf beetles. It adheres even to wet and slippery surfaces and can be re-used endlessly and removed without leaving any residues.

“We have examined the detachment behaviour of single mushroom-shaped adhesive microstructures under the microscope, at the highest resolution both in time and space”, says Heepe. The scientists took pictures of the detachment process at 180,000 frames per second. “We discovered that the actual moment of detachment – or more precisely: the moment when a defect in the contact area starts to develop up to its complete separation – lasts only a few micro-seconds.” The contact rips apart with up to 60 percent of the speed of sound of the material, or 12 metres per second. “This can be achieved only if a homogeneous stress distribution exists between the mushroom-shaped adhesive element and the surface”, Heepe explains. Reaching such high speeds in this short time requires very much elastic energy, which can only be stored when stress in contact is homogeneously distributed. Other adhesive geometries, such as flat punch, create stress concentrations and start to separate at the edges. With the mushroom head, its thin plate prevents the formation of stress peaks and detaches itself from the inside to the outside. A lot of strength is necessary to do this – therefore, adhesion is strong.

“With our experiments we have been able to unravel an important effect of a very successful adhesion mechanism in nature”, Heepe concludes the work of the interdisciplinary scientific team at Kiel University. Their high-speed analysis also confirms a theoretical model recently presented by an Italian group of scientists.

The findings of the study made in Kiel can be used for further development of glue-free adhesive surfaces with enhanced performance. It also takes the scientists at the Collaborative Research Centre 677 “Function by Switching” a step closer to one of their declared goals: They want to create photoswitchable adhesive systems that can be turned between an adhesive and non-adhesive state by light of certain wave lengths.