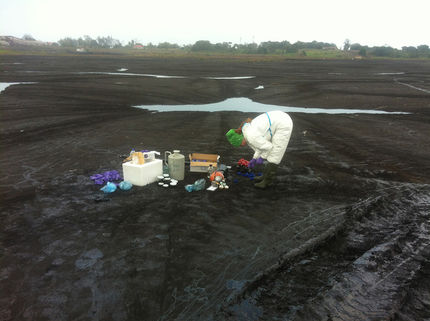 Scientists at the oil seep

Miniscule water droplets in oil provide a habitat for a number of microorganisms. Scientists from the Helmholtz Zentrum München have discovered that these communities of microorganisms play a part in breaking down the oil and have published their findings in the journal Science.

Oil might not, at first sight, seem like an inhabited terrain. Within the oil, however, are tiny, suspended water droplets. “Inside them we found complex microbial communities, which play an active part in oil degradation in situ,” says first author Prof. Rainer Meckenstock from the Helmholtz Zentrum München (HMGU).

Previously it was assumed that microbial oil degradation only occurred at the oil-water interface. The team headed by Prof. Meckenstock from the Institute of Groundwater Ecology and the Department of Biogeochemistry at HMGU along with international colleagues from the Technical University of Berlin, Washington State University (USA) and the University of West Indies (Trinidad and Tobago) have now been able to demonstrate that degradation processes also occur within the oil phase.

“Degradation changes the chemical composition of the oil and ultimately leads to the formation of viscous bitumen, as in oil sands, “ Prof. Meckenstock explains. “Our data thus supplies important information about oil quality and is therefore essential for the industry that surrounds what is still the most important energy source worldwide.”

Oily inhabitants: a curse or a blessing?

Although the breakdown of chemical compounds (hydrocarbons) damages the oil, this can be highly desirable in contaminated groundwater. The microorganisms, which have adapted to an extremely toxic habitat, could pave the way for new concepts for cleaning up pollution in groundwater. The scientists are planning follow-up projects to refine this approach.

Investigations by the scientists were conducted at Pitch Lake in Trinidad and Tobago in the Caribbean. The lake is a natural source of oil; the oil rises to the surface, where it solidifies and forms a hard crust (bitumen).