On the edge of graphene 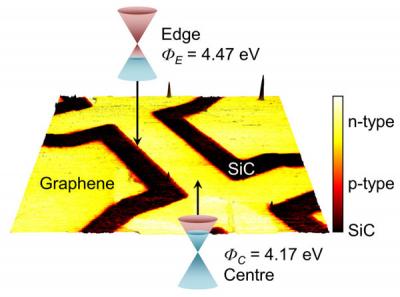 This image shows the differences along the edge of the graphene.

Researchers at the National Physical Laboratory (NPL) have discovered that the conductivity at the edges of graphene devices is different to that of the central material.

Local scanning electrical techniques were used to examine the local nanoscale electronic properties of epitaxial graphene, in particular the differences between the edges and central parts of graphene Hall bar devices. The research was published in Scientific Reports, an open access publication from Nature Publishing Group.

At a smaller scale, these effects become more acute; when working at the submicron level, the altered properties may affect up to 25% of the material. Although both n- and p-type semiconductors conduct electricity, different types of conduction need to be acknowledged in the development of any devices. Graphene is increasingly used in the electronics industry and new devices will need to accommodate these differences.

The results of this study are useful for developing graphene nanoribbon devices as well as for looking at edge photocurrents and the quantum Hall effect. The team is extending its work by investigating these effects in structurally different forms of graphene. In doing so, they will be able to compare different types of graphene and look more closely at the cause of these effects.