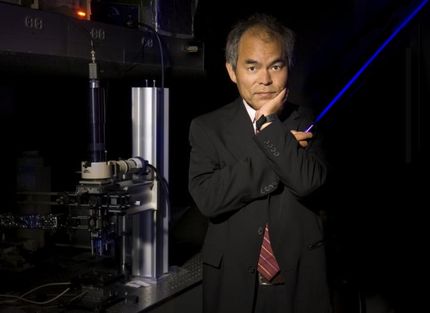 This is Shuji Nakamura, winner of the prize.

UCSB materials professor and 2014 Nobel Laureate Shuji Nakamura has been awarded the Draper Prize for Engineering by the National Academy of Engineering (NAE). Nakamura, who is also a professor of electrical and computer engineering at UCSB, will share the prize with four other recipients also deemed by the NAE as pioneers of LED lighting.

Nakamura has been the recipient of many prestigious awards and honors, including the 2014 Nobel Prize in Physics, for his invention of the first high-brightness blue LED, which led to the invention of the ubiquitous and energy-efficient bright white LED. A member of the UCSB faculty since 2000, Nakamura also won Japan's Order of Culture Award in 2014. Prior to that, he was the recipient of the 2009 Harvey Prize, the 2006 Millenium Technology Prize, and a 2011 Emmy from the National Academy of Television Arts and Sciences. Nakamura has also received the Institute of Electrical and Electronics Engineers' (IEEE) Jack A. Morton Award and the IEEE Laser and Electro-Optics Society Engineering Achievement Award, as well as the Materials Research Society Medal, among other honors and medals.

LED (light-emitting diode) lighting has become the technology of choice for many existing and emerging applications. The long lasting, low heat-generating and highly energy efficient form of lighting has been used as indicator lamps and readout displays since its early days. As the lights got brighter and different colors were developed, the list of uses grew. Today, LEDs are found virtually everywhere - in the latest TV screen displays, smartphone screens, computers, vehicle lamps, home lighting, and even as solar cell powered night-time lighting in parts of the world where people have no access to electricity. According to the U.S. Department of Energy, LEDs have reduced the country's CO2 emissions by an estimated 12 million tons in 2013.

Nick Holonyak Jr. created the first LED in 1962. George Craford invented the first yellow LED a decade later, developed the processes for the first large-scale commercial production of red LEDs and subsequently continued to contribute to the development of white LEDs. In 1977, Russell Dupuis invented the process that is the basis of virtually all production of high-brightness LEDs, as well as laser diodes, solar cells and high-speed optoelectronic devices.

Blue LEDs were the final, and also the most challenging step toward the energy efficient holy grail of white LED lights. Blue was the color needed to mix with red and yellow LEDs to create the highly sought bright white light. In 1989, Isamu Akasaki created the first blue LED. In 1994, Nakamura, with the use of gallium nitride, demonstrated the first high-brightness blue LED. According to industry analysts, LED lighting created a $17.7 billion global industry, while benefiting the environment with its high efficiency.

The annual Charles Stark Draper Prize was established in 1988 by the Draper Laboratory and endowed to the NAE in 1988. It is the NAE's highest honor and is given for engineering achievements that have significantly impacted society by improving the quality of life, and/or expanding access to information.