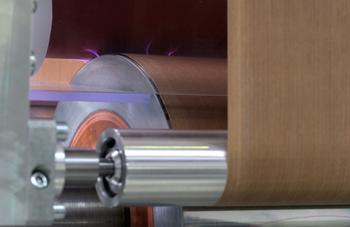 Many years went into development, then came six months with the screwdriver, of tweaking and testing, and now they are finally there: the scientists of the Fraunhofer Institute for Surface Engineering and Thin Films in Braunschweig together with their partners GRT GmbH & Co. KG, Systec System- und Anlagentechnik GmbH & Co. KG, WLW Wagner Leisner Wolter GmbH and Schuler Konstruktionen GmbH & Co. KG have built their first reel-to-reel plasma printing system and delivered it to a Japanese company in the Osaka area.

The manufacturer of functional polymer films and sheets uses the system for research and development purposes. "With this system, films measuring up to 450 mm in width can be continuously treated with plasma, and very specifically only at the desired locations", says Dr. Michael Thomas, the project leader and head of department at the Fraunhofer IST. A further scaling-up is in the planning stage.

‘Plasma printing’ exploits the nature of the fourth state of matter – plasma - with its chemically reactive components as a tool to produce micropatterned surfaces. For instance, the wettability of polymer surfaces can be area-selectively adjusted to create hydrophilic or hydrophobic areas, that is, water-loving or water-repellent areas. Water-loving areas were produced with surface energies up to 72 mN/m.

With the plasma, furthermore, plastics can be activated without elaborate chemical etching processes in an environmentally friendly manner such that structured, well-adherent metallization is possible in a subsequent step. 'Plasma printing' is also particularly suitable for the selective functionalization of surfaces with reactive groups which permit a subsequent chemical coupling reaction. There is a need for such functionalizations in, among other fields, the life sciences, for example, in the development of biochips and biosensors.