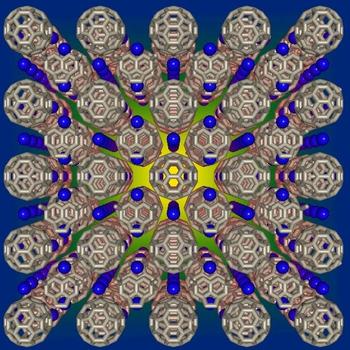 An international research team, led by Professor Kosmas Prassides of Tohoku University, has investigated the electronic properties of the family of unconventional superconductors based on fullerenes which have the highest known superconducting critical temperature (Tc) among molecular superconductors.

In results published in the American scientific journal Science Advances, the team was able to demonstrate the guiding influence of the molecular electronic structure in controlling superconductivity and achieving the maximum Tc, opening the way to new routes in the search of new molecular superconductors with enhanced figures of merit.

The research team has addressed for the first time the relationship between the parent insulator, the normal metallic state above Tc and the superconducting pairing mechanism in a new family of chemically-pressurized fullerene materials. This is a key question in understanding all unconventional superconductors including the high-Tc cuprates, the iron pnictides and the heavy fermion systems.

Their work unveiled a new state of matter - the Jahn-Teller metal - and showed that when the balance between molecular and extended lattice characteristics of the electrons at the Fermi level is optimized, the highest achievable temperature for the onset of superconductivity is attained.

As synthetic chemistry allows the creation of new molecular electronic structures distinct from those in the atoms and ions that dominate most known superconductors, there is now strong motivation to search for new molecular superconducting materials.