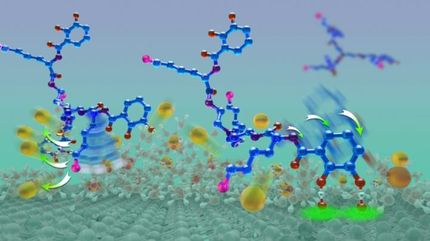 Wet adhesion is a true engineering challenge. Marine animals such as mussels, oysters and barnacles are naturally equipped with the means to adhere to rock, buoys and other underwater structures and remain in place no matter how strong the waves and currents. Synthetic wet adhesive materials, on the other hand, are a different story.

Taking their cue from Mother Nature and the chemical composition of mussel foot proteins, the Alison Butler Lab at UC Santa Barbara decided to improve a small molecule called the siderophore cyclic trichrysobactin (CTC) that they had previously discovered. They modified the molecule and then tested its adhesive strength in aqueous environments. The result: a compound that rivals the staying power of mussel glue.

"There's real need in a lot of environments, including medicine, to be able to have glues that would work in an aqueous environment," said co-author Butler, a professor in UCSB's Department of Chemistry and Biochemistry. "So now we have the basis of what we might try to develop from here."

Also part of the interdisciplinary effort were Jacob Israelachvili's Interfacial Sciences Lab in UCSB's Department of Chemical Engineering and J. Herbert Waite, a professor in the Department of Molecular, Cellular and Developmental Biology, whose own work focuses on wet adhesion.

"We just happened to see a visual similarity between compounds in the siderophore CTC and in mussel foot proteins," Butler explained. Siderophores are molecules that bind and transport iron in microorganisms such as bacteria. "We specifically looked at the synergy between the role of the amino acid lysine and catechol," she added. "Both are present in mussel foot proteins and in CTC."

Mussel foot proteins contain similar amounts of lysine and the catechol dopa. Catechols are chemical compounds used in such biological functions as neurotransmission. However, certain proteins have adopted dopa for adhesive purposes.

From discussions with Waite, Butler realized that CTC contained not only lysine but also a compound similar to dopa. Further, CTC paired its catechol with lysine, just like mussel foot proteins do.

"We developed a better, more stable molecule than the actual CTC," Butler explained. "Then we modified it to tease out the importance of the contributions from either lysine or the catechol."

Co-lead author Greg Maier, a graduate student in the Butler Lab, created six different compounds with varying amounts of lysine and catechol. The Israelachvili lab tested each compound for its surface and adhesion characteristics. Co-lead author Michael Rapp used a surface force apparatus developed in the lab to measure the interactions between mica surfaces in a saline solution.

Only the two compounds containing a cationic amine, such as lysine, and catechol exhibited adhesive strength and a reduced intervening film thickness. Compounds without catechol had greatly diminished adhesion levels but a similarly reduced film thickness. Without lysine, the compounds displayed neither characteristic. "Our tests showed that lysine was key, helping to remove salt ions from the surface to allow the glue to get to the underlying surface," Maier said.

"By looking at a different biosystem that has similar characteristics to some of the best-performing mussel glues, we were able to deduce that these two small components work together synergistically to create a favorable environment at surfaces to promote adherence," explained Rapp, a chemical engineering graduate student. "Our results demonstrate that these two molecular groups not only prime the surface but also work collectively to build better adhesives that stick to surfaces."

"In a nutshell, our discovery is that you need lysine and you need the catechol," Butler concluded. "There's a one-two punch: the lysine clears and primes the surface and the catechol comes down and hydrogen bonds to the mica surface. This is an unprecedented insight about what needs to happen during wet adhesion."