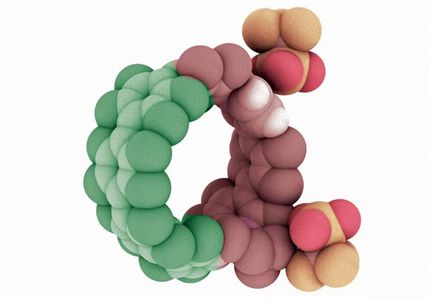 Illustration of a cycloparaphenylene, or nanohoop, that has been doped with nitrogen atoms. Research in the University of Oregon lab of Ramesh Jasti has shown the combination of nitrogen and carbon atoms extends the potential efficiency and capabilities of such structures.

When Ramesh Jasti began making tiny organic circular structures using carbon atoms, the idea was to improve carbon nanotubes being developed for use in electronics or optical devices. He quickly realized, however, that his technique might also roll solo.

In a new paper, Jasti and five University of Oregon colleagues show that his nanohoops - known chemically as cycloparaphenylenes - can be made using a variety of atoms, not just those from carbon. They envision these circular structures, which efficiently absorb and distribute energy, finding a place in solar cells, organic light-emitting diodes or as new sensors or probes for medicine.

The research, led by Jasti's doctoral student Evan R. Darzi, is a proof-of-principle for the process, which will have to wait for additional research to be completed before the full impact of these new nanohoops can be realized, Jasti said.

These barely one-nanometer nanohoops offer a new class of structures for use in energy or light devices, said Jasti, who was the first scientist to synthesize these types of molecules.

"These structures add to the toolbox and provide a new way to make organic electronic materials," Jasti said. "Cyclic compounds can behave like they are hundreds of units long, like polymers, but be only six to eight units around. We show that by adding non-carbon atoms, we are able to move the optical and electronic properties around."

Nanohoops help solve challenges related to materials with controllable band gaps - the energies that lie between valance and conduction bands and is vital for designing organic semiconductors. Currently long materials such as those based on polymers work best.

"If you can control the band gap, then you can control the color of light that is emitted, for example," Jasti said. "In an electronic device, you also need to match the energy levels to the electrodes. In photovoltaics, the sunlight you want to capture has to match that gap to increase efficiency and enhance the ability to line up various components in optimal ways. These things all rely on the energy levels of the molecules. We found that the smaller we make nanohoops, the smaller the gap."

To prove their approach could work, Darzi synthesized a variety of nanohoops using both carbon and nitrogen atoms to explore their behavior. "What we show is that the charged nitrogen makes a nanohoop an acceptor of electrons, and the other part becomes a donator of electrons," Jasti said.

"The addition of other elements like nitrogen gives us another way to manipulate the energy levels, in addition to the nanohoop size. We've now shown that the nanohoop properties can be easily manipulated and, therefore, these molecules represent a new class of organic semiconductors - similar to conductive polymers that won the Nobel Prize in 2000," he said. "With nanohoops, you can bind other things in the middle of the hoop, essentially doping them to change properties or perhaps sense an analyte that allows on-off switching."

"We haven't gotten very far into the application of this," he said. "We're looking at that now. What we were able to see is that we can easily manipulate the energy levels of the structure, and now we know how to exchange any atom at any position along the loop. That is the key discovery, and it could be useful for all kinds of semiconductor applications."