Crack it! Energy from a fossil fuel without carbon dioxide

Technology to produce hydrogen from methane without carbon dioxide emissions 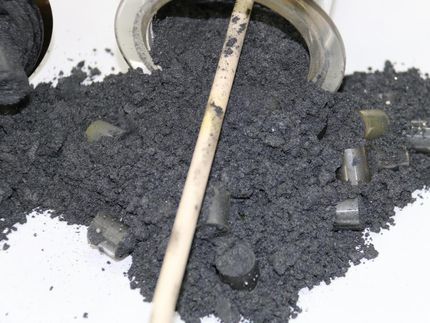 Solid black carbon is a by-product of methane cracking.

The production of energy from natural gas without generating carbon dioxide emissions could fast become a reality, thanks to a novel technology developed by researchers of the Institute for Advanced Sustainability Studies (IASS) in Potsdam and the Karlsruhe Institute of Technology (KIT). In a joint project initiated by Nobel Laureate and former IASS Scientific Director Professor Carlo Rubbia, the two institutions have been researching an technique to extract hydrogen from methane in a clean and efficient way. After two years of intensive experiments the proof-of-principle has now been provided. With the experimental reactor running reliably and continuously, the future potential of this technology has become apparent.

The combustion of fossil fuels to produce electricity, power car engines or generate heat is a major source of harmful carbon dioxide emissions. In particular methane -- the main component of natural gas -- is a widely used fossil fuel whose worldwide production is forecasted to rise dramatically in the coming decades. Left unchecked, this continued reliance on conventional fossil fuel technologies will greatly hamper our efforts at mitigating climate change. This is why researchers at the IASS and KIT have decided to investigate an alternative and more sustainable approach: what if we could extract the energy content of methane, in the form of hydrogen, without generating any carbon dioxide in the process.

Instead of burning methane (CH4), its molecular components, hydrogen (H2) and carbon (C), can be separated in a process called 'methane cracking'. This reaction occurs at high temperatures (750°C and above) and does not release any harmful emissions.

The first product, hydrogen, is an energy vector best known for its clean combustion and high energy density per unit mass. In fact, many view it as an important component of a future, sustainable energy system. Envisaged applications include fuel cells, electricity generation and hydrogen-powered vehicles. But hydrogen is already today an important industrial commodity, used in large quantities for the production of ammonia -- a key precursor for the fertiliser industry. Yet most of the world's hydrogen production is currently based on conventional technologies like steam methane forming (SMR), which also uses natural gas as feedstock but releases significant amounts of carbon dioxide in the process. Indeed, carbon dioxide emissions from the ammonia industry alone amount to approximately 200 million tons per year -- by comparison, Germany generates around 800 million tons of carbon dioxide per year.

While hydrogen is the main output of methane cracking, its by-product, solid black carbon, is also an increasingly important industrial commodity. It is already widely employed in the production of steel, carbon fibres and many carbon-based structural materials. The black carbon derived from the novel cracking process is of high quality and particularly pure powder. Its value as a marketable product therefore enhances the economic viability of methane cracking. Alternatively, black carbon can be stored away, using procedures that are much simpler, safer and cheaper than the storing of carbon dioxide.

Methane cracking itself is not an entirely new idea: in the last two decades, many experiments in different institutions have been carried out that have proven its technical feasibility. But these past attempts were limited by issues such as carbon clogging and low conversion rates.

The IASS and KIT have decided to build on this knowledge base and go one step further, setting up an experimental reactor that could demonstrate the potential of methane cracking and overcome previous obstacles. The starting point is a novel reactor design, as proposed by Carlo Rubbia and based on liquid metal technology. Fine methane bubbles are injected at the bottom of a column filled with molten tin. The cracking reaction happens when these bubbles rise to the surface of the liquid metal. Carbon separates on the surface of the bubbles and is deposited as a powder at the top end of the reactor when they disintegrate. This idea was put to the test during a series of experimental campaigns that ran from late 2012 to the spring of 2015 in KIT's KALLA (KArlsruhe Liquid Metal LAboratory). Researchers were able to evaluate different parameters and options, such as temperature, construction materials and residence time. The final design is a 1.2-metre-high device made of a combination of quartz and stainless steel, which uses both pure tin and a packed bed structure consisting of pieces of quartz.

"In the most recent experiments in April 2015, our reactor operated without interruptions for two weeks, producing hydrogen with a 78% conversion rate at temperatures of 1200°C. In particular the continuous operation is a decisive component of the kind of reliability that would be needed for an industrial-scale reactor" said Professor Thomas Wetzel, head of the KALLA laboratory at KIT. The innovative reactor is resistant to corrosion, and clogging is avoided because the microgranular carbon powder produced can be easily separated. The reactor thus guarantees the technical preconditions that would be needed for the continuous operation of an industrial-scale reactor.

While these remain laboratory-scale experiments, researchers can extrapolate from them to gain insights into how methane cracking could be integrated into the energy system and, more specifically, what its contribution to sustainability could be. To this end, the IASS is collaborating with RWTH Aachen University to conduct a life cycle assessment (LCA) of a hypothetical commercial methane cracking device based on a scaling-up of our prototype. Notably, we assume that some of the produced hydrogen is used to generate the required process heat. The compared hydrogen production technologies were steam methane reforming (SMR) and water electrolysis coupled with renewable electricity. With respect to emissions of carbon dioxide equivalent per unit of hydrogen, the LCA showed that methane cracking is comparable to water electrolysis and more than 50% cleaner than SMR.

Furthermore, IASS researchers have also analysed the economic aspects of methane cracking. At this stage, cost estimates are uncertain, since methane cracking is not yet a fully mature technology. However, preliminary calculations show that it could achieve costs of 1.9 to 3.3 euro per kilogram of hydrogen at German natural gas prices, and without taking the market value of carbon into consideration.

"Our experimental results as well as the environmental and economic assessments all point to methane cracking as a clear candidate option in our portfolio of measures to transform the energy system," said Professor Carlo Rubbia. "This could be a gap-bridging technology, making it possible to tap into the energy potential of natural gas while safeguarding the climate and facilitating the integration of a clean energy carrier like hydrogen."

In the next phase of the process, the IASS and KIT will focus on optimising some aspects of the reactor design, such as the carbon removal process, and progressively scaling it up to accommodate higher flow rates.