A Quantum of Light for Materials Science 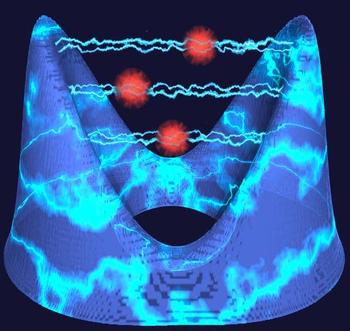 The charge density of an electron (in blue) changes its form due to the interaction with photons (in red).

Computer simulations that predict the light-induced change in the physical and chemical properties of complex systems, molecules, nanostructures and solids usually ignore the quantum nature of light. Scientists of the Max-Planck Institute for the Structure and Dynamics of Matter at CFEL in Hamburg and the Fritz Haber Institute of the Max Planck Society in Berlin have now shown how the effects of the photons can be properly included in such calculations. This study opens up the possibility to predict and control the change of material properties due to the interaction with light particles from first principles.

The basic building blocks of atoms, molecules and solids are positively charged nuclei and negatively charged electrons. Their mutual interactions determine most physical and chemical properties of matter, such as the electrical conductivity or the absorption of light. The laws that guide this delicate interplay between electrons and nuclei are those of quantum electrodynamics (QED), in which particles interact via the exchange of photons, which are the quanta of light. However, the equations of QED are so complex that in practice scientists have to simplify them to be able to make any prediction for real materials. A very common simplification in quantum chemistry and solid-state physics is to neglect the quantum nature of light. Although this assumption works well for many applications, recent experiments have uncovered situations where the quantum nature of the photons can dramatically change the material properties and give rise to new collective behavior and phenomena.

The standard simulation techniques usually neglect the photons. In order to simulate such situations on a computer, the theory department of the MPSD, headed by Prof. Angel Rubio, has thus developed a novel theoretical method that also includes the interaction with photons. The basic idea is to treat the full QED system of particles and photons as a quantum fluid. Here the particles are represented by a charge current, and the photons by a classical electromagnetic field that acts on the current in a very complex manner. In their current work, the researchers have shown how this approach can exactly describe the dynamics of an electron that is trapped on a surface and that strongly interacts with photons. “The advantage of this reformulation of the coupled electron-photon problem is that it allows for approximations that treat photons and particles on equal footing.,” says Johannes Flick, one of the lead authors of the work, “In this way we can come up with new simulation techniques that do not neglect the photons while still being simple enough to be practical," adds Michael Ruggenthaler, second lead author of the article. In a next step after this proof-of-principle, Rubio’s team wants to use the developed technique to investigate complex systems in situations where photons are assumed to play an important role and hence learn how this modifies the properties of materials. This could provide a new way to control and alter chemical reactions in complex systems such as biomolecules and to design new states of matter.