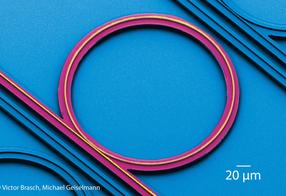 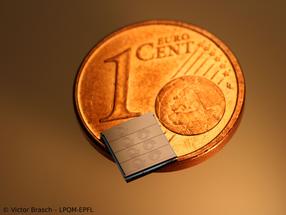 Researchers funded by the SNSF have developed a laser signal generating device useful for telecommunications applications and chemical analysis.

Researchers funded by the Swiss National Science Foundation have made a chip-based device that can generate a laser signal with frequencies spaced in a comb-like fashion. Their work could be used in telecommunications applications and in chemical analysis

In general, light and water waves alike stretch out and dissipate as they move further and further away from their source. However, there is a type of wave that maintains its shape as it propagates: solitons.

Researchers funded by the Swiss National Science Foundation (SNSF) have successfully produced optical solitons – light waves that retain their shape – using a microresonator. The light is composed of a range of frequencies separated very precisely by the same distance, producing what physicists call a frequency comb, since it resembles the regular spacing between the teeth of a comb.

To generate the solitons, researchers at EPFL and the Russian Quantum Center in Moscow have used microresonators. "These microscopic ring-shaped structures are made from very fine silicon nitride," explains Tobias Kippenberg, the EPFL group leader. "They are capable of storing for a few nanoseconds the light of the laser to which they are coupled. This period of time is sufficient for the light to circumnavigate the ring thousands of times and to accumulate there, which strongly increases the intensity of the light." The interaction between the microresonator and the light becomes non-linear. The laser, which is normally continuous by nature, is converted into ultra-short pulses: solitons.

By adapting the parameters for manufacturing microresonators, the EPFL researchers additionally managed to generate a so-called soliton Cherenkov radiation. This broadens the frequency spectrum: the comb contains a greater number of teeth. Published in Science, the results have set a new record for this type of structure. The frequencies generated now extend over two thirds of an octave compared with the frequency of the laser.

"These results represent a promising advance for applications that require many widely spaced frequencies," says Kippenberg. In the context of optical communications, one single laser would be enough to create a range of individual frequencies which could separately carry information. Chemical spectroscopy and atomic timekeeping are other potential fields of application. "We have filed a patent, since there is potential for further technological developments," says Kippenberg.