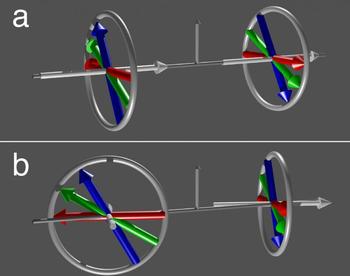 A) shows the classical configuration where the two rotating magnets (shown in rotation in red, green and blue arrows) share the same rotation axis (gray arrows). A similar setup is used in modern milk frothers and food mixers, as well as magnetic stirrers in chemistry labs. B) shows one configuration studied in this research with the rotating magnets having their rotation axes (gray arrows) perpendicular to each other.

The new milk frother you are using to prepare your cappuccino is likely using magnetic gears. Magnetic gears transmit rotary motion like mechanical gears but instead of teeth they use magnetic attraction and repulsion between rotating magnets. Dr Johannes Schoenke, a postdoctoral scholar at the Okinawa Institute of Science and Technology Graduate University (OIST) a theory which extends the possibilities and applications for smooth magnetic couplings, which can produce an even motion without any counterforce. This research has several potential applications in nanotechnology, microfluidics and robotics.

Magnetic gears have several advantages over mechanical gears. The main one is the absence of direct contact between the parts. While mechanical gears, such as the meshing gears inside a watch, transmit the motion through the contact between moving teeth, magnetic gears are contactless. Magnetic gears require less maintenance, no lubrication, they have also better reliability, and efficiency, and they produce lower vibration and noise. Magnetic gears are often based on an alloy of iron, boron and neodymium, which creates the strongest permanent magnets known to date.

Some of our food mixers in the kitchen, magnetic stirrers in a chemistry lab or other industrial magnetic couplings are based on the idea that the two magnets rotate around the same axis. "I wanted to explore the possibility of positioning the input and output axes at any desired inclination angle," explains Dr Schoenke. "Furthermore, there are certain configurations of the two magnets that allow the addition of a third magnet at a specific position and still maintain a smooth coupling". As an illustrative example, Dr Schoenke modeled a paddle boat where two magnets are connected to the paddles and one to the driving system. If the magnet of the driving system is rotated, the paddles move in a synchronized way to push the boat forward. Interestingly, because of the contactless nature of the magnetic coupling, the paddle axle is fixed outside of the boat, and it does not penetrate the hull. However, the specific triangle geometry between the positions of the three magnets is crucial, to make the coupling work smoothly. In the future, this type of technology is going to be particularly useful in micro- and nanosystems. As for the paddles of the boat model, the motion of mini pumps and valves placed inside micro-channels can be controlled from outside in a contactless way.

The same analogy between mechanical and magnetic gears can be further explored by considering the interaction between a quadrupole and a magnet, each rotating around a specific axis. One way to construct a quadrupole is to place four magnets like a cross, positioned in a way that two north poles and two south poles alternatively face the center. The quadrupole can be thought of as a gear with twice as many teeth as the single magnet. So that when the magnet is rotated by a full cycle, the quadrupole rotates only half a cycle. By rotating the magnet, the quadrupole rotates correspondingly, as it would happen with a mechanical gear wheel mechanism.

"The next step is to build a 3D printed toy-size car based on the design principle of the paddle boat using 3 strong inch-sized spherical magnets. The new Objet Connex 500 3D printer which just arrived at OIST will be perfect for this proof of concept project," enthuses Dr Schoenke. "I am excited to test the theory with an experimental prototype."