New lasers for police and petrochemistry 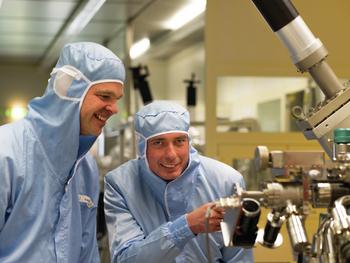 Martin Kamp and Professor Sven Höfling working in the highly controlled environment of the University of Würzburg's cleanroom.

Laser to replace breathalyser – this principle could be the future of traffic controls: Physicists of the University of Würzburg have developed a laser that can be used to measure alcohol in the driver's cab. But the new laser can do much more.

Is this the future of traffic controls? A special laser is set up at the side of the road to scan passing vehicles. Its light is reflected by a mirror positioned on the other side of the road. The laser detects whether there are alcohol molecules inside the vehicle. The molecules get into the driver's cab for example through the breath of a drunk driver.

This laser measurement is surprisingly accurate: The novel alcohol measurement system sounds an alarm if the car is driven by a person with a blood alcohol content of at least 0.1. However, the device cannot distinguish whether it is the driver or the passenger who is drunk. "But police can use the system to make a preselection, pick out suspicious cars to check them more thoroughly," says Martin Kamp, a physicist at the Julius-Maximilians-Universität Würzburg (JMU) in Bavaria, Germany.

Based on established technology

Martin Kamp has developed the new laser technology (interband cascade laser) together with Professor Sven Höfling at the Department of Technical Physics. The scientists resorted to the well-known technology of laser-supported stand-off detection which helps detecting hazardous substances, for example at airports or major events.

So far, this type of detection has been used to discover hazards such as explosives: When the laser light is reflected by explosives, the spectral distribution of the reflected beams is significant: "The wavelengths are indicative of the object's composition," Kamp says.

Hence, this method is also suitable to identify explosives or drunk drivers. The JMU researchers have teamed up with partners from industry to work on additional applications, for example in petrochemistry.

Their current protect is named iCspec. A new laser is being developed by joint effort of various cooperation partners such as Siemens and Nanoplus GmbH (Gerbrunn). It is planned to use the laser in refineries to determine the exact composition of gases.

"The laser would be capable of analysing the composition of the gases created when distilling crude oil in fractions of a second. Hence, it would be an efficient tool in quality assurance and process control in petrochemical processes," says Kamp, who is in charge of the iCspec project. Besides the industry, the European Union also has an interest in the novel lasers: It funds the project within the scope of its Horizon 2020 programme.

The Würzburg scientists have designed very special semiconductor structures for this novel and complex petrochemical application: Up to 2,000 wafer-thin material layers stacked on top of one another in an ultra-high vacuum chamber establish the basis for the state-of-the-art laser.

The new laser is set to be tested under real conditions soon. A practical test in the refinery of Swedish cooperation partner Preem Petroleum AB will require the laser to detect hydrocarbons such as methane, ethane or propane during distillation. Previous tests have been encouraging. "These lasers could revolutionise measurement technology," Kamp says.