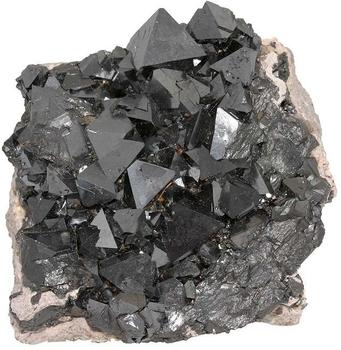 An international group of researchers including Russian scientists from the Moscow State University has been studying the behaviour of the recently-discovered Fe4O5, iron oxide. The group has succeeded in describing its complex structure, and proposed an explanation for its very unusual properties.

An international group of researchers including Russian scientists from the Moscow State University has been studying the behaviour of the recently-discovered Fe4O5, iron oxide. The group has succeeded in describing its complex structure, and proposed an explanation for its very unusual properties.

The scientists discovered that when Fe4O5 iron oxide is cooled to temperatures below 150K, it goes through an unusual phase transition related to a formation of charge-density waves -- which lead to a "four-dimensional" crystal structure. Artem Abakumov (Senior Researcher at the Chemistry Faculty of the Department of Electrochemistry at the Lomonosov Moscow State University and one of the paper's authors) said that the further study of this material would be rewarding from the viewpoint of a fundamental understanding of the interconnection between magnetic and crystal structures.

The origins of this research date back to 1939, when the German physicist E.J.W. Verwey first discovered that the iron oxide Fe3O4 - commonly known as the mineral magnetite -- had a strange phase transition. Magnetite in its normal state is a relatively good electrical conductor, but when cooled below 120K its conductivity markedly decreased, and the material practically became an insulator. Scientists guessed the reason for this transformation explaining that below 120K, the iron atoms arrange themselves into a kind of ordered structure. In this structure the electrons are denied to move freely within the material and act as charge carriers, so that this oxides even becomes a ferroelectric. Even so, the scientists could not explain what exactly changes in the structure -- something which physicists have spent the last century attempting to discover. All that could be suggested was the phenomenon was related to the presence of iron atoms in two different oxidation states (valences) - 2 and 3 - and their consequent ability to form ordered structures.

The answer to this question was found only recently, in 2012 - when a group of researchers led by Prof. Paul Attfield of Cambridge University managed to synthesise high-quality magnetite single crystals and decipher their structure. Scientists showed that -- just as had been suggested earlier - a so-called change in the ordering had occurred, in which two- and three-valent iron atoms arranged themselves into groups of three, which were called trimerons.

The authors decided to look at different iron oxide, Fe4O5 , which has only recently been discovered by an American research team. It's an unusual oxide that can only be formed at extremely high temperatures and pressure -- meaning that it is not to be found on the Earth's surface, and exists alongside other oxides containing even greater levels of oxygen, as is now believed, at tremendous depths of hundreds of kilometres below our planet's surface.

When examining the behaviour of this oxide - which was obtained by Sergey Ovsyannikov in the group of Dr Leonid Dubrovinsky of the University of Bayreuth in Germany, who is a specialist in the synthesis of materials at high pressure -- scientists discovered that this oxide has a phase transition phase very similar to that noted by Verwey in magnetite. It differs, however, in occurring at different temperatures, and the configuration of the structure obtained is much more complex.

"We have found that here, just as in magnetite, when cooling to lower than 150K occurs, an unusual structure evolves. It's something of a mixture between standard charge density waves forming dimers" (chains of iron atom pairs which have foreshortened interatomic distance -- Ed) Artem Abakumov commented, "and the situation with the trimerons that was observed in magnetite. This was very complicated in the case of Fe4O5 -- what's known as a 'incommensurately modulated structure", in which we can't identify three-dimensional periodicity. However, the periodicity can be observed in a higher-dimensional space -- in this specific case, in the four-dimensional space. When we mention the four-dimensionality of such structures, we are not actually talking about the existence of these oxides in four dimensions, of course. This is just a technical construct for the mathematical description of such highly complex ordering."

Despite clear similarities between the behaviours of magnetite and Fe4O5, the charge-ordered structure of Fe4O5 remains centro-symmetric, without exhibiting any ferroelectric properties. The special interest which scientists have in Fe3O4 results from the fact that magnetite belongs to a class of materials known as multiferroics -- in which two kinds of ordering are seen at the same time, magnetic and electric. If these two different orders become coupled with each other, then the effect of the magnetic field on the material can alter its electric polarization -- or conversely, magnetisation changes being affected by electric field.

"If this happens," says Artem Abakumov, "then we get a bifunctional material. That's of interest not only from the fundamental physics viewpoint or solid-state chemistry -- but also in terms of how it could be put into practical use. It could be used in sensors - for example, in magnetic field sensors. The only drawback is that normally a coupling of a magnetic and electrical order is pretty weak, and only appears at low temperatures. Comparative analysis of the crystalline, electronic and magnetic structure of Fe4O5 and magnetite will give us a better shot at studying the relationship of the magnetic and electrical order in these kinds of materials".