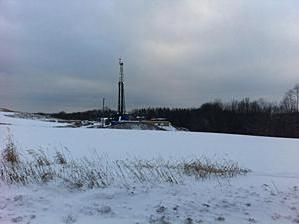 Researchers from the University of Cincinnati recently studied the sources of methane at three sites across the nation in order to better understand this greenhouse gas, which is much more potent at trapping heat in the atmosphere than is carbon dioxide.

The UC team, led by Amy Townsend-Small, assistant professor of geology, identified sources for methane in Carroll County, Ohio; Denver, Colorado; and Dallas/Fort Worth, Texas, by means of an analysis technique that consists of measuring carbon and hydrogen stable isotopes (isotopic composition). This approach provides a signature indicating whether methane is coming from, say, natural gas extraction (fracking), organic/biologic decay, or the natural digestive processes of cattle.

Said Townsend-Small, "This is an analysis technique that provides answers regarding key questions as to specific sources for methane emissions. With isotopic composition analysis, it's possible to tell whether the source is fracking or biogenic processes (like bacterial decomposition in landfills or algae-filled water). It's a laborious technique to implement, but its use makes it possible to trace and attribute the source of methane production."

The UC Groundwater Research of Ohio program first launched in 2012 in Carroll County, Ohio, when there were only three fracking (hydraulic fracturing) wells in the county. The goal of the research was to establish a baseline for methane levels and origins of methane in private wells and springs before, during and after the onset of fracking. By the time the study was complete, there were 354 fracking wells in the county.

Results from this study, where 23 wells were tested three to four times each year and a total of 191 samples examined, found that methane levels in these groundwater wells came from decay of organic matter (decomposition of plants) biological processes occurring in subsurface coal formations. In less than a handful of cases, the natural methane levels were relatively high (above 10 milligrams per liter). However, most of the wells carried low levels of methane.

The water wells varied in their distance from active natural gas wells, from 1 kilometer to more than 10 kilometers.

And update and in-process results of this study were released via a 2014 university news release subsequently carried by news media at that time.

Monitoring fracking in Colorado and Texas

In the Denver Basin, which encompasses the city of Denver and the surrounding region, Townsend-Small and her team examined about 200 methane samples in 2014, collecting airborne measurements via aircraft as well as measuring methane levels on the ground, site by site.

Collection efforts focused on both atmospheric data and ground-level, site-specific samples in order to help ensure accuracy via cross checking of results.

In the Denver region, the isotopic composition signatures of the samples collected demonstrated that up to 50 percent of methane emissions in the region were from agricultural practices (cattle) and/or landfill sources, with the other half (about 50 percent) coming from fracking for natural gas.

Similar testing in the Barnett Shale region of Dallas/Fort Worth, involving the collection and analysis of 120 samples in 2013, found that 64 percent of the methane emissions came from fracking while 36 percent came from landfills and cattle.