Particle Zoo in a Quantum Computer 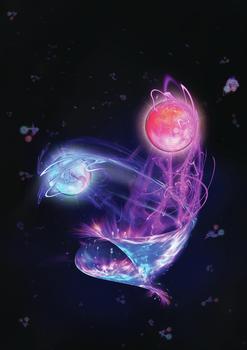 Physicists have simulated the creation of elementary particle pairs out of the vacuum by using a quantum computer.

Physicists in Innsbruck have realized the first quantum simulation of lattice gauge theories, building a bridge between high-energy theory and atomic physics. In the journal Nature, Rainer Blatt‘s and Peter Zoller’s research teams describe how they simulated the creation of elementary particle pairs out of the vacuum by using a quantum computer.

Elementary particles are the fundamental buildings blocks of matter, and their properties are described by the Standard Model of particle physics. The discovery of the Higgs boson at the CERN in 2012 constitutes a further step towards the confirmation of the Standard Model. However, many aspects of this theory are still not understood because their complexity makes it hard to investigate them with classical computers. Quantum computers may provide a way to overcome this obstacle as they can simulate certain aspects of elementary particle physics in a well-controlled quantum system. Physicists from the University of Innsbruck and the Institute for Quantum Optics and Quantum Information (IQOQI) at the Austrian Academy of Sciences have now done exactly that: In an international first, Rainer Blatt‘s and Peter Zoller’s research teams have simulated lattice gauge theories in a quantum computer.

Gauge theories describe the interaction between elementary particles, such as quarks and gluons, and they are the basis for our understanding of fundamental processes. “Dynamical processes, for example, the collision of elementary particles or the spontaneous creation of particle-antiparticle pairs, are extremely difficult to investigate,” explains Christine Muschik, theoretical physicist at the IQOQI. “However, scientists quickly reach a limit when processing numerical calculations on classical computers. For this reason, it has been proposed to simulate these processes by using a programmable quantum system.” In recent years, many interesting concepts have been proposed, but until now it was impossible to realize them. “We have now developed a new concept that allows us to simulate the spontaneous creation of electron-positron pairs out of the vacuum by using a quantum computer,” says Muschik. The quantum system consists of four electromagnetically trapped calcium ions that are controlled by laser pulses. “Each pair of ions represent a pair of a particle and an antiparticle,” explains experimental physicist Esteban A. Martinez. “We use laser pulses to simulate the electromagnetic field in a vacuum. Then we are able to observe how particle pairs are created by quantum fluctuations from the energy of this field. By looking at the ion’s fluorescence, we see whether particles and antiparticles were created. We are able to modify the parameters of the quantum system, which allows us to observe and study the dynamic process of pair creation.”

With this experiment, the physicists in Innsbruck have built a bridge between two different fields in physics: They have used atomic physics experiments to study questions in high-energy physics. While hundreds of theoretical physicists work on the highly complex theories of the Standard Model and experiments are carried out at extremely expensive facilities, such as the Large Hadron Collider at CERN, quantum simulations may be carried out by small groups in tabletop experiments. “These two approaches complement one another perfectly,” says theoretical physicist Peter Zoller. “We cannot replace the experiments that are done with particle colliders. However, by developing quantum simulators, we may be able to understand these experiments better one day.” Experimental physicist Rainer Blatt adds: “Moreover, we can study new processes by using quantum simulation. For example, in our experiment we also investigated particle entanglement produced during pair creation, which is not possible in a particle collider.” The physicists are convinced that future quantum simulators will potentially be able to solve important questions in high-energy physics that cannot be tackled by conventional methods.

Foundation for a new research field

It was only a few years ago that the idea to combine high-energy and atomic physics was proposed. With this work it has been implemented experimentally for the first time. “This approach is conceptually very different from previous quantum simulation experiments studying many-body physics or quantum chemistry. The simulation of elementary particle processes is theoretically very complex and, therefore, has to satisfy very specific requirements. For this reason it is difficult to develop a suitable protocol,” underlines Zoller. The conditions for the experimental physicists were equally demanding: “This is one of the most complex experiments that has ever been carried out in a trapped-ion quantum computer,” says Blatt. “We are still figuring out how these quantum simulations work and will only gradually be able to apply them to more challenging phenomena.” The great theoretical as well as experimental expertise of the physicists in Innsbruck was crucial for the breakthrough. Both Blatt and Zoller emphasize that they have been doing research on quantum computers for many years now and have gained a lot of experience in their implementation. Innsbruck has become one of the leading centers for research in quantum physics; here, the theoretical and experimental branches work together at an extremely high level, which enables them to gain novel insights into fundamental phenomena.