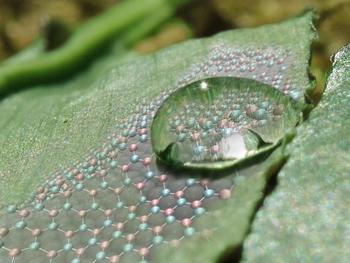 The atomic structure determines the wetting and adhesion properties. 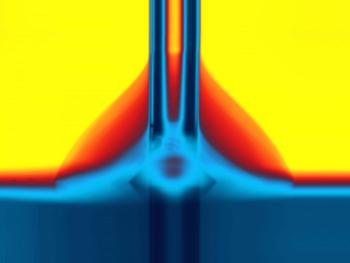 Wetting and static friction depend on the surface.

When rain falls on a lotus leaf, the leaf doesn't get wet. Thanks to its special structure, the water drops roll off without wetting the surface. Artificial materials can be made water-repellent, too. It is, however, extremely challenging to produce a surface with switchable wetting. Now, a research team from TU Wien, KU Leuven and University of Zürich has managed to manipulate a surface of a single layer of boron nitride in such a way that it can be switched back and forth between states with high and low wetting and adhesion.

„One of the most interesting physical properties of a surface is its stiction or static friction" says Stijn Mertens (Institute of Applied Physics at the Vienna University of Technology, and associated with KU Leuven in Belgium). „This force has to be overcome for an object on the surface to start sliding." The nanostructure of the surface determines its stiction to a large extent: the details of the contact between the surface and another object (for example, a drop of liquid) depend on the geometry of its atoms and other properties. This in turn is crucial for adhesion, stiction and wetting. The relationship between stiction and wetting, however, is so far only poorly understood.

"Just as the material graphene consists of only one layer of carbon atoms, our boron nitride -- which contains as many boron as nitrogen atoms -- has a thickness of only one atomic layer", explains Thomas Greber from the Physics Institute at the University of Zürich. This ultrathin layer can be grown on a rhodium single crystal. The atoms on the rhodium surface and in the boron nitride form a hexagonal pattern, but the distances between the atoms in the two materials are different. Thirteen atoms in boron nitride take the same space as twelve rhodium atoms, so that the two crystals do not fit together perfectly. Because of this mismatch, the boron nitride hexagons must bend, they appear as a frozen wave with a wavelength of 3.2 nanometres and a height of about 0.1 nanometres.

„Precisely this two-dimensional nanowave influences the wetting of the surface by water", says Stijn Mertens. In any case, the boron nitride superstructure can be made flat with a simple trick: by putting the material in acid and applying an electrical voltage, hydrogen atoms creep under the boron nitride layer and change the bond between nitrogen and rhodium. This makes the boron nitride flat. Suddenly the adhesion of a water drop on the surface changes dramatically - even though the drop is 100'000 times bigger than the tiny waves in the boron nitride. If the voltage is decreased, this effect is reversed: „We can switch the surface again and again between these two states", explains Stijn Mertens.

To investigate the wetting of the surface and apply the voltage at the same time, an instrument was built specially for this purpose, in which a liquid drop is brought on the surface through a very thin glass tube. The drop is made bigger and smaller while at the same time its shape is recorded. Whether the drop shape is flat or more rounded depends on the properties of the surface.

Concepts to switch the wetting of a surface forth and back have been around for a while. For example, organic molecules that change their shape with light of a certain colour can be attached to the surface. However, such molecules are much more complex and fragile than the materials studied here. „Our surface consists of only a single layer of atoms, is completely inorganic and does not change even if we heat it in vacuum to 1000 °C", agree Stijn Mertens and Thomas Greber. „This means that this material could also be used for applications where organic molecules would long be destroyed, ranging from daily life to space travel."