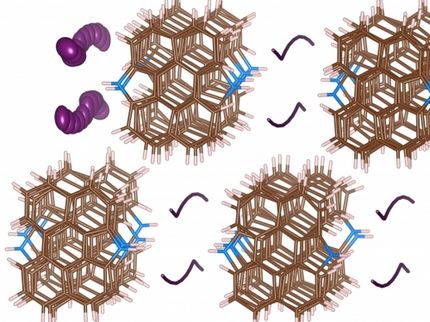 A depiction of a pyrroloperylene-iodine complex

In the pursuit of a new class of photovoltaic materials, researchers at UC Santa Barbara happened upon an entirely different discovery that addresses a centuries-old mystery of chemistry: Why does an iodine solution turn blue-black when starch is added to the mix?

The exact structural-chemical mechanism that causes the intense deflection of blue light during this transformation has been a subject of active speculation until this point. Shedding light on this mechanism, UCSB researchers in the labs of materials professors Fred Wudl and Ram Seshadri report first observation of crystalline infinite iodide polymers, discovered as part of a pyrroloperylene-iodine complex, an organic semiconductor that contains iodine.

“Every college student taking introductory chemistry learns titration of iodide with thiosulfate solution as part of the curriculum. You add starch as an indicator of iodine to detect the end-point,” explained Seshadri. “When you add iodine to potato starch in solution, it turns a dark blue-black.”

This starch-iodine complex transformation discovered almost exactly 200 years ago, is used in classrooms as a foundational teaching tool in chemistry and biochemistry, such as demonstrating the action of amylose, the enzyme that breaks down starch, in human saliva, or the chemistry behind counterfeit banknote detection pens.

Fast forward two centuries of scientific discovery to UCSB researchers using a technique called Raman spectroscopy, which observes the light-scattering patterns of a molecule that can be a unique fingerprint, to study iodine chains in a semiconducting pyrroloperylene-iodine complex. They initially set out to study this promising organic semiconductor material as part of a new class of solar power-generating materials, a project funded by the U.S. Department of Energy.

“We determined that, when iodide is in the presence of iodine and interspersed between molecules of pyrroloperylene, a polymer chain forms,” Wudl explained. “There is only one other element that can form its own polymeric chain, and that’s sulfur.” Single-element polymeric chains are a rarity, to say the least.

“The problem with sulfur polymer chains is that they’re not crystalline,” Wudl continued. “If there’s no molecule repeating in a precise way you can’t determine where all the atoms are.” The crystalline structure of the polyiodide chain is what allowed the UCSB materials researchers to clearly observe iodine in this form.

What this discovery means to the future of chemistry and materials science, only time will tell, according to Wudl. “If you had told someone in the 1950s there would someday be organic electronic materials they would have laughed you out of the room,” he said. “Discovering new compositions of matter usually leads to new concepts, and these concepts drive technology down the road.”

For now, they agreed, the discovery is mainly of academic interest. “If you know where the atoms are, you can use the knowledge to develop things later, such as functional materials for new electronics,” said Seshadri. “At this time, we can say with confidence this is one for the chemistry textbooks.”