Was the secret spice in primal gene soup a thickener? 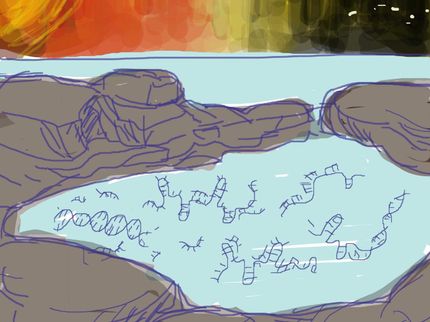 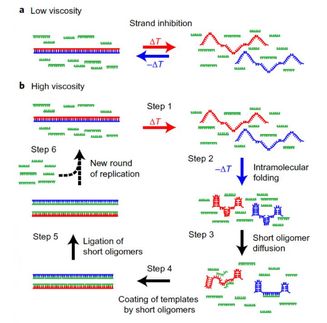 Image "a" shows that water alone will not allow copying to go forward. Image "b" shows that viscosity allows gene strands to pair up with components of potential copies.

The original recipe for gene soup may have been simple -- rain, a jumble of common molecules, warm sunshine, and nighttime cooling. Then add a pinch of thickener.

The last ingredient may have helped gene-like strands to copy themselves in puddles for the first time ever, billions of years ago when Earth was devoid of life, researchers at the Georgia Institute of Technology have found. Their novel discoveries add to a growing body of evidence that suggests first life may have evolved with relative ease, here and possibly elsewhere in the universe.

And they offer a straightforward answer to a gnawing 50-year-old question: How did precursors to the present-day genetic code first duplicate themselves before the existence of enzymes that are indispensable to that process today?

The spice of life?

For generations, scientists pursuing an answer performed experiments in water but hit a wall.

Georgia Tech researchers Christine He and Isaac Gállego overcame it by adding an off-the-shelf viscous solvent (the thickener). In separate experiments with DNA then RNA, the copying process proceeded.

"I think it's very, very different from anything that's been done before," said researcher He. "We can change the physical environment in an easy way, and promote these processes that wouldn't happen in conditions ordinarily being used."

Easy is crucial, said Martha Grover, a professor who oversaw the research at Georgia Tech's School of Chemical and Biomolecular Engineering. Easy reactions are likely to be more productive and more prevalent.

"A simple and robust process like this one could have operated in a variety of environments and concentrations making it more realistic in moving evolution forward," she said.

Grover's lab and that of Nick Hud at Georgia Tech's School of Chemistry and Biochemistry published the results. Their research has been funded by the National Science Foundation and the NASA Astrobiology Program under the NASA/NSF Center for Chemical Evolution.

Earliest life was based on RNA, or a similar polymer, according to a hypothesis called the RNA World. In that scenario, on the evolutionary timeline, the self-replication of RNA strands long enough to be potential genes would roughly mark the doorstep to life.

Those long nucleotide chains may have been mixed together in puddles with shorter nucleotide chains. Heat from the sun would have made long strands detach from their helix structures, giving short ones a chance to match up with them, and become their copies.

But there's a problem.

In water alone, when cooling sets in, the long chains snap back into their helix structure so rapidly that there's no time for the matching process with the shorter chains. That snapping shut, which happens in both RNA and DNA, is called "strand inhibition," and in living cells, enzymes solve the problem of keeping the long chains apart while gene strands duplicate.

"The problem is a problem in water, which everybody sort of looks at in prebiotic (pre-life) chemistry," said graduate research assistant He. She felt it was time to rethink that, and her expertise in chemical engineering helped.

High viscosity has been known to slow down the movement of long strands of DNA, RNA and other polymers.

"It's a little like making them swim in honey," Grover said. Applying that to origin-of-life chemistry seemed obvious, because in prebiotic times, there probably were quite a few sticky puddles.

"In that solution, it gives the short nucleotides, which move faster, time to jump onto the long strand and piece together a duplicate of the long strand," researcher He said. In her experiments, it worked.

Hairpins in the soup

And it produced an encouraging surprise. The DNA and RNA strands folded onto themselves forming shapes called hairpins.

"In the beginning, we didn't realize the importance of the internal structure," Christine He said. Then they noticed that the shape was helping keep RNA and DNA available for the pairing process. "Hairpin formation is integral to keeping them open," Grover said.

But it also could have accelerated chemical evolution in another way. "The solution is selecting here for sequences that fold, and that would have more potential for functional activity - like a ribozyme," said researcher He.

Ribozymes are enzymes made of RNA, and enzymes catalyze biochemical processes. To have them evolve in the same solution that promotes genetic code replication could have shortened the path to first life.

"You really need to amplify functional sequences for evolution to move forward," Grover said. The folds were an unexpected side-effect, and finding them paves the way for future research.

The Georgia Tech scientists used real gene strands in their experiments, which may sound mundane, but in the past, some researchers have specially engineered DNA and RNA sequences in attempts to arrive at similar results.

He and Gállego's use of a naturally occurring gene, rather than a specifically engineered sequence, shows that viscosity could have been a very general solution to promote copying of nucleic acids with mixed length and sequences.

To facilitate quick, clear outcomes, the Georgia Tech researchers used purified short nucleotide chains and applied them in ratios that favored productive reactions. But they had started out with messier, less pure ingredients, and the experience was worthwhile.

"Considering a pre-biotic soup, it's probably messy; it's got a lot of impurities," Christine He said. "When we first started out with more impure nucleotides, it still worked. Maybe the same reaction really could have happened in a messy puddle billions of years ago."

The viscous solvent was glycholine, a mixture of glycerol and choline chloride. It was not likely present on pre-biotic Earth, but other viscous solvents likely were.

Also, after the short strands matched up to each long one, the researchers did apply an enzyme to join the aligned short pieces into a long chain, in a biochemical process called ligation.

The enzymes would not have been present on a prebiotic Earth, and although there are chemical procedure for ligating RNA, "no one has developed a chemistry so robust yet that it could replace the enzyme," Grover said.

Finding one that could have worked on a prebiotic Earth would be a worthy aim for further research.