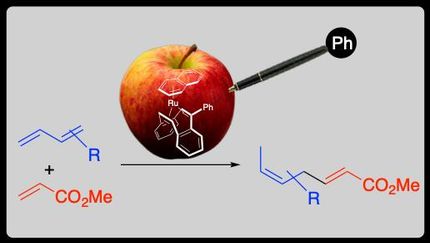 Take for example a poisoned apple, it can emit an intoxicating mellow aroma just by sticking a pen and change to be delicious.

Scientists from Tokyo University of Agriculture and Technology (TUAT), Japan, have discovered that a catalyst poison, which deactivates homogeneous catalysts, can be "reborn" as an efficient ligand by introduction of a substituent, in chemical reactions. This finding is of service to expand the ligand design in homogeneous catalysts.

A research team at TUAT was looking for cyclic diene ligands for a ruthenium (Ru) catalyst to synthesize skipped dienes, which are known to be substructures of many natural products and pharmaceutical molecules. By accident, they came across dibenzocyclooctatetraene, a homogenous catalyst poison, to work as a ligand . After screening, they finally found that phenyl attachement to the catalyst poison was a very efficient ligand. Technically, reaction of β-myrcene (one of the most widespread group of natural products) with methyl acrylate catalyzed by a Ru complex with 1,5-cyclooctadiene (1 mol %; a typical cyclic diene ligand) produced the linear coupling product only in 23% yield at 30 °C for 7 hours. However, the 5-phenyldibenzocyclooctatetraene (dibenzocyclooctatetraene was attached to a phenyl group) complex of Ru catalyzed the reaction to give the product in 97% yield within 1 hour under the same conditions.

The dibenzocyclooctatetraene tightly binds to the Ru center by its nature. One of the keys for this high catalytic activity probably arises from the steric effect of the phenyl group. In the presence catalysis giving skipped dienes, the formed skipped diene molecules are prone to stay on the catalyst as a stable intermediate but the phenyl group sweeps the product molecule away from the catalyst. As the result, the catalyst can take actions for further catalysis.

"Before a catalytic process, one normally has to remove substances that work as the catalyst poisons not to deactivate the catalyst. They are nuisances in catalyses because they tightly bound to the active site in catalysts. However, the strongly bind nature to the catalyst is an advantage as a ligand in homogeneous catalysts. Our finding let us know a small alteration of a catalyst poison, not only do-not-hampers the catalysis, but brings acceleration of the catalysis as a ligand of catalyst. Our results are surely service to the further development on the design of tough ligands for catalysts. In other words, a catalyst poison is not "Born This Way" but can be "Reborn" as an efficient ligand" said Masafumi Hirano, a TUAT professor of chemistry and a principal of the study.

The Tokyo University of Agriculture and Technology