Opening the Way to Mobile Olfaction with Nanomechanical Sensors 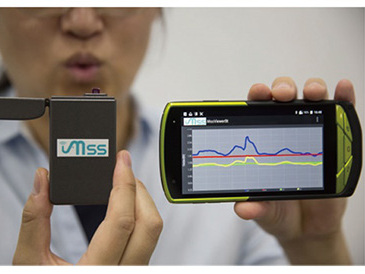 Image of a mobile olfaction device with the MSS

The MSS is a sensor element which was jointly developed in 2011 by Genki Yoshikawa (Group Leader, MANA, NIMS), the late Dr. Heinrich Rohrer and Ecole polytechnique federale de Lausanne (EPFL). It is a versatile, small and sensitive sensor element capable of measuring diverse molecules in the atmosphere and in liquids, including gas molecules and biomolecules. Unlike conventional nanomechanical sensors, the MSS can achieve high sensitivity with a compact system thanks to the comprehensive structural optimization with electric read-out based on piezoresistors. Its sensitivity is more than 100 times higher than that of conventional piezoresistive nanomechanical sensors, even surpassing that of optical read-out.

The MSS will be utilized for the development of “mobile olfaction” compatible with the emerging “IoT society,” contributing in various fields such as foods, cosmetics, medicine, the environment and safety, anytime, anywhere and for anybody.

To speed up the popularization and practical application of the MSS technology in society, NIMS launched an industry-government-academia joint research framework, the MSS Alliance, in collaboration with the above-mentioned partners, who possess the key technologies for development of practical olfaction sensor systems and related services. Through this framework, Dr. Yoshikawa’s research group is working on the challenging tasks of optimizing element technologies and establishing a reliable measurement system toward a de facto standard for an olfaction sensor.