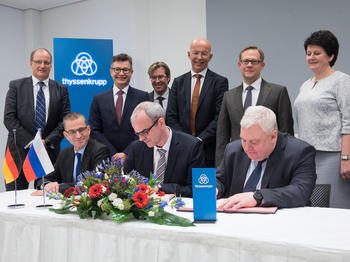 thyssenkrupp Industrial Solutions has signed an agreement with the Russian joint-stock company POLYESTER PLANT IVANOVO to build a new PET polymer and staple fibre production plant. The facility with an annual production capacity of up to 200,000 tons of polyester polymer will be built in the Ivanovo region, roughly 250 km northeast of Moscow. The contract awarded to thyssenkrupp is worth around €150 million and includes engineering, procurement and the supervision of erection and commissioning.

Werner Steinauer, CEO of Uhde-Inventa Fischer, a subsidiary of thyssenkrupp Industrial Solutions: “The key to success in this new project was not only our best-in-class technology, but also the ongoing intensive contact with our customer in order to identify their needs.” Uhde-Inventa Fischer has successfully constructed more than 450 polymer plants worldwide, including several projects in Russia: In 2011, the company and its customer Alco-Naphtha put the first state-of-the-art MTR® plant into operation for the production of 240,000 tons of high-quality PET per year. Other projects include a 100,000 ton per year PET production line built for Senege and three polyamide production lines built for KuibyshevAzot.

The new PET production plant will be the centerpiece of a production complex for synthetic fibres. Its construction is aimed at overcoming the dependence of the region's textile enterprises on imported commodities. As a subcontractor to thyssenkrupp, Oerlikon Neumag will be responsible for the delivery of three staple fibre production lines.