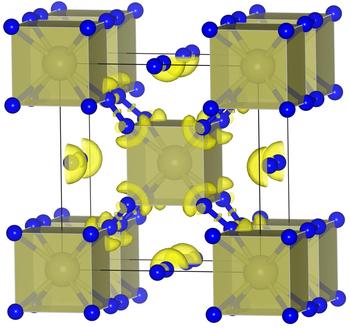 This is a hafnium nitride (HfN10) structure

Using theoretical methods, an international group of scientists led by Artem R. Oganov, Professor of Skoltech, Stony Brook University and Moscow Institute of Physics and Technology predicted unusual from the point of view of classical chemistry nitrides of hafnium and chromium with the chemical formulae HfN10 (and its zirconium analogue ZrN10) and CrN4. These compounds can be obtained at relatively low pressures and contain high-energy groups of nitrogen atoms. Pure polymeric nitrogen is the ideal high-energy compound that packs so much energy per unit volume or mass that it could be used as a powerful explosive if it were not for gigantic pressures of its synthesis. This work shows that nitrogen polymerizes at much lower pressures in presence of metal ions, and such compounds might find practical use. The authors also predicted a range of new hafnium nitrides as well as nitrides, carbides and borides of chromium, with an unusual combination of properties (high hardness, electrical conductivity, and toughness).

Superhard materials can be divided into two main classes: compounds of boron, carbon, nitrogen and oxygen together and compounds of transition metals with boron, carbon and nitrogen. The scientists studied four systems in two simultaneously published works: hafnium-nitrogen, chromium-nitrogen, chromium-carbon and chromium-boron. Several new materials, which can be formed at relatively low pressure, were predicted. Among them there are materials with an unusual combination of very high hardness and electrical conductivity. In particular, newly predicted carbide Cr2C should even be stable at atmospheric pressure; and researchers were able to resolve for the first time the crystal structure of a known compound Cr2N. The most interesting finding is the chemical compound with the formula HfN10 - here, there are ten nitrogen atoms per hafnium atom. Its structure is very peculiar from a chemical point of view: The hafnium atoms and N2 molecules are sandwiched between infinite chains of nitrogen atoms. Such structure is formed under relatively low pressure of 0.23 Mbar. According to Professor Artem R. Oganov: "This finding brings us back to one of the Holy Grails in material science, the search for polymeric nitrogen, an ideal high-energy-density material".

The fact of the matter is that all good explosive compounds contain nitrogen - at the moment of explosion the nitrogen atoms form the extraordinary stable N2 molecule, releasing a vast amount of energy. The more nitrogen atoms in a compound, and the more unusual their bonding, the more energy will be released as a result of the explosion. Polymeric nitrogen was first predicted by American physicist C. Mailhiot in 1992 and then synthesized in 2004 by Russian physicist Michael Eremets under pressures exceeding one million atmospheres. At such pressures only micron-sized samples can be made, which rules out any practical applications. Professor Oganov says: "Our group works on several projects related to metal polynitrides. This is a promising class of high-energy-density compounds, requiring much lower pressures than pure polymeric nitrogen (e.g., 5 times lower in case of HfN10, or even less for CrN4, and this is likely not the limit). Chemists have long dreamed about synthesising polymeric nitrogen in large quantities. We have proposed the compound class that can fulfil this dream. "