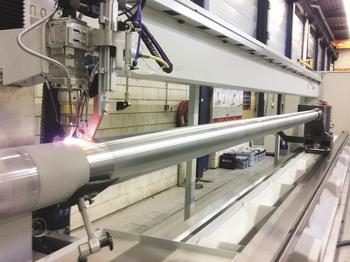 World premiere: EHLA system for Laser Material Deposition of piston rods having a length of up to ten meters.

The strict conditions on the use of chromium(VI) for corrosion and wear protection coatings, which will take effect in the EU in September 2017, hit the manufacturers of highly stressed metal components particularly hard. One such company is IHC Vremac Cylinders B.V. in the Dutch city of Apeldoorn. The hydraulic cylinders it manufactures, which often measure many meters in length, have to withstand rough maritime conditions for years. With its choice of an award-winning alternative to hard chrome plating, this Dutch manufacturer has become the first company in the world to coat its components using the EHLA technique developed by the Fraunhofer Institute for Laser Technology ILT in Aachen.

Because of the upcoming admission restriction on coatings which are produced with hexavalent chromium, IHC Vremac Cylinders had long been searching for a fast and economical alternative to hard chrome plating. The Dutch company ultimately opted for the EHLA technique (extreme high-speed Laser Material Deposition), which was awarded the 2017 Joseph von Fraunhofer Prize in May. In the patented EHLA method, a laser beam melts the powder particles already above the melt pool.

Because the particles no longer have to be heated and melted in the melt pool, process speeds can be accelerated from previous levels of between 0.5 and 2 meters per minute to as much as 500 meters per minute. EHLA can also reduce layer thickness: whereas the minimum thickness of layers used to be 500 micrometers, layers as thin as 25-250 micrometers can now be achieved cost-effectively. Moreover, the layers are smoother, with roughness reduced to a tenth of typical values for Laser Material Deposition.

The concept and the first industrial-standard system in Aachen impressed IHC Vremac Cylinders, so the company contracted Hornet Laser Cladding B.V. – a manufacturer of Laser Material Deposition systems in Lexmond, Netherlands – to build an EHLA system. “The advantage of using EHLA to coat rotationally symmetric parts is that the necessary components can be integrated into a lathe,” explains Thomas Schopphoven, head of the Productivity and System Technology team in the Laser Material Deposition group at Fraunhofer ILT, Aachen. It took them less than six months to procure and convert a lathe for the roughly 14-meter-long EHLA system, and thereafter install and commission it.

“For a hydraulic cylinders, we currently apply a protective layer of Inconel 625 some 400 micrometers thick, which then requires some grinding rework. The final layer thickness is around 200 micrometers,” says Andres Veldman, Engineering Manager at IHC Vremac Cylinders. “EHLA is significantly faster than high-velocity oxygen fuel spraying, or HVOF and entails much less post-processing.”

The Dutch company is already using EHLA in production manufacturing. After completing several projects, Veldman is certain that EHLA currently costs roughly the same as thermal spraying. In his view, EHLA will become more economical once the rework processes have been optimized. IHC Vremac Cylinders has already managed to convince important end customers – including some in the offshore sector – of the benefits of this new coating. To this end, the company had Lloyds certify EHLA as per DIN EN ISO 15614-7. As Veldman explains, “The experts were very skeptical at the beginning, because we tested layers with a thickness of only 200 micrometers in the laboratory – before grinding them down further to between 150 and 100 micrometers. We did this to ensure that the coatings will offer good corrosion protection even after being subjected to wear.”