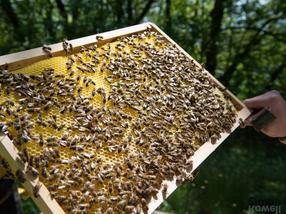 Honeybees on a freshly built comb during the harvest season.

A global sampling of honey finds 75% to be contaminated with neonicotinoid pesticides. Of note, the concentrations detected are below the amount authorized by the European Union for human consumption. The situation is more bleak for pollinators, however. Widespread application of neonicotinoids has been identified as a key factor responsible for the global decline in pollinators, particularly bees.

Edward A.D. Mitchell et al. sought to explore the extent of exposure by testing 198 honey samples for five commonly used neonicotinoids: acetamiprid, clothianidin, imidacloprid, thiacloprid, and thiamethoxam. Samples were taken across all continents (except Antarctica), as well as numerous isolated islands. Overall, 75% of all honey samples contained at least one neonicotinoid; of these contaminated samples, 30% of contained a single neonicotinoid, 45% contained two or more, and 10% contained four or five. Concentrations were highest in European, North American, and Asian samples.

American Association for the Advancement of Science