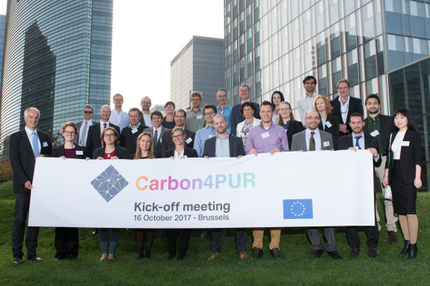 This consortium of 14 partners from seven countries, led by Covestro, is now planning to investigate how flue gas from the steel industry can be used to produce plastics in a particularly efficient and sustainable way.

The use of carbon dioxide and other waste gases as a new source of raw materials is increasingly a topic of interest at the European level. A new consortium of 14 partners from seven countries, led by materials manufacturer Covestro, is now planning to investigate how flue gas from the steel industry can be used to produce plastics in a particularly efficient and sustainable way. This will save crude oil, the raw material used in conventional methods. The cross-sector project called Carbon4PUR receives funding from the European Union.

“Together, we are on the path to a crucial innovation: waste gas mixtures from the steel industry can provide carbon for a chemical processes and ultimately be used to produce insulation materials and coatings,” explained Dr. Markus Steilemann, the Covestro Board Member responsible for Innovation, Marketing and Sales. “This helps us to broaden our resource base and to reduce the climate footprint for the entire value chain. At the same time, we are joining our forces by partnering with industrial and academic partners throughout Europe.”

The new project introduces an unprecedented cooperation extending from the waste gas source to the plastics manufacturer. The European Union is supporting Carbon4PUR under the auspices of SPIRE, the European Public-Private Partnership, dedicated to innovation in resource and energy efficiency enabled by the process industries. About eight million euros are provided for the time of three years. The industrial partners will leverage this contribution by further investments.

Specifically, the project aims to use mixtures of carbon dioxide and carbon monoxide, which are generated during steel production, to produce polyols – key components of polyurethane-based insulating materials and coatings that are otherwise obtained from crude oil.

The process being developed is special because it eliminates the resource intensive step of separating the waste gas into its different components. Instead, the gas mixture will be subjected to a chemocatalytic process and converted directly into building blocks and intermediates for polyurethanes. This can reduce its carbon footprint by 20 to 60 percent.

Last year, Covestro began using carbon dioxide to produce a precursor for soft polyurethane foam, which is designed for use in upholstered furniture and mattresses. Meanwhile, the company is researching additional areas of application for CO2-based raw materials.