The key to chemical transformations 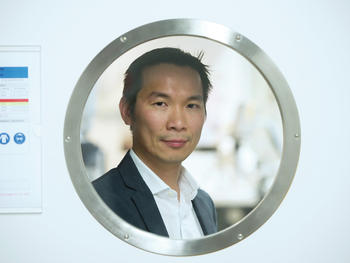 Chemist Xile Hu is the winner of the National Latsis Prize for 2017. Hu, a professor at the École Polytechnique Fédérale de Lausanne, was recognised for his outstanding scientific career and his original contributions to the fundamental understanding of catalysis.

Catalysis is a field of chemistry that studies materials that can accelerate or bring about chemical transformations. Hu has distinguished himself through his pioneering work on the production of solar fuels and the synthesis of high-added-value molecules. The prize is awarded each year by the Swiss National Science Foundation (SNSF) on behalf of the International Latsis Foundation.

Hu, who was born in China and came to Switzerland in 2007, founded the Laboratory of Inorganic Synthesis and Catalysis at the École Polytechnique Fédérale de Lausanne (EPFL). He is known for his innovative approach, which consists of combining the concepts and methods associated with three different types of catalysis (homogeneous, heterogeneous and enzymatic), which traditionally have remained separate. This approach has led to unprecedented understanding of fundamental catalysis and enabled the discovery of new catalysts with properties superior to those of previous materials.

"I decided not to worry too much about barriers between the types, as long as they work and give interesting results", says Hu, a professor at the EPFL's Institute of Chemical Sciences and Engineering. "I always try to introduce something new or unpredictable to my research, but that's not necessarily obvious. Scientists like things to happen logically, so when you suggest something unfamiliar or that's believed to be impossible, you may sound a little crazy."

Accordingly, the 39-year-old Hu sought to model enzymes (enzymatic catalysis) as part of his research on solar fuels (heterogeneous catalysis). "It didn't work, but we discovered a very good, new type of catalyst", explains Hu. Half of his research team is working on solar fuels. "We use solar energy to split water into oxygen and hydrogen, because hydrogen is an excellent source of energy", says Hu, who received his undergraduate degree in chemistry from Peking University. "We would like to use catalytic materials to store this energy in the form of chemical products." Hu estimates that such a technology could become reality in 15 to 20 years.

At the heart of chemistry

Research on high-value-added molecules for chemical products is Hu's other major area of research. "We are focusing on catalysis based on elements that are abundant on Earth, like iron, copper and nickel", says Hu, who did his postdoctoral research at the California Institute of Technology. "Until now, the chemical industry has mostly been working with precious metals like platinum, but these are rare and expensive. Abundant Earth elements are cheaper and have good potential, seeing as how they have been very little studied from that vantage." These new molecules could later find use in the pharmaceutical, food-processing or even cosmetic industries.

Hu has amassed a remarkable number of publications for someone his age. "Scientific articles are really collaborative efforts", he says. "I have been fortunate in finding students who are motivated and excited by the idea of investigating areas that are still relatively undiscovered."

"I find it fascinating to be able to create new materials and to work in a field that has an impact on both nature and the living world", says Hu. "Catalysis is at the heart of chemistry, but it goes unnoticed because it is so much a part of everyday life. Yet today it is more important than ever, especially for dealing with the energy challenges that humanity faces."