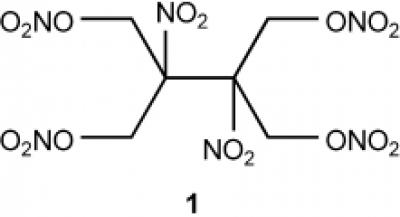 A high-energy-density nitrate ester (1) with unique properties was synthesized in good yield in a three-step process. Destructive stimuli studies and explosive performance calculations show that (1) has similar performance properties to those of well-characterized explosives.

Since the discovery of nitroglycerin in 1846, the nitrate ester group of compounds has been known for its explosive properties. A whole series of other nitrate esters have been subsequently put to use as explosives and fuels. A research team led by David E. Chavez at Los Alamos National Laboratory (USA) has now developed a novel tetranitrate ester. As reported in the journal Angewandte Chemie, the compound has a particularly interesting characteristic profile: it is solid at room temperature, is a highly powerful explosive, and can be melt-cast into the desired shape.

Nitrate esters are organic nitric acid compounds that can contain enormous explosive force. However, their liquid physical state makes handling very difficult. By mixing in various other components, Alfred Nobel developed dynamite, a distinctly safer and easier to handle nitroglycerine-based explosive. The only solid nitrate ester used as an explosive before is nitropenta. Because of its high melting point of about 140 °C, nitropenta must be pressed into the desired form.

Chavez and his co-workers have now made another nitrate ester to give nitropenta a run for its money. Thanks to its low melting point of only about 85 °C, which is well below its decomposition point (141 °C), it can be melted and poured into molds, a much easier process for the production of explosive components.

The new compound contains four nitrate ester groups (–ONO2) and two nitrate groups (–NO2) bound to a total of six carbon atoms. Its crystals demonstrate the highest density found for a nitrate ester so far. Computer calculations predict that the new tetranitrate ester should have an explosive power as high as that of octogen (HMX) — currently one of the highest-performance explosives. The sensitivity of the new compound toward shocks, friction, and sparks is equivalent to that of nitropenta.

"Because of its amazing properties, the new nitrate ester opens up a unique opportunity to produce castable explosive components," says Chavez. "In addition, it could also be used as a highly energetic softener for other explosives, and as an oxidizer component."

The researchers also plan to use their new synthetic route for the development of other explosive materials.