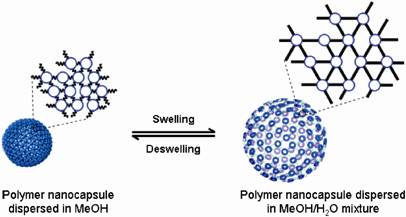 Korean scientists have developed solvent-responsive polymer nanocapsules. Kimoon Kim and co-workers from Pohang University of Science and Technology and Korea University, Seoul, found that these nanocapsules swelled or deswelled in response to a change in the solvent mixture. The swelling led to an increase in the permeability of the capsule, resulting in the controlled release of an encapsulated fluorescent dye.

However, Kim says that designing and making these capsules for practical applications is still a challenge. ‘For such stimuli-responsive nanocapsules to be clinically useful in drug delivery or diagnostic applications, they should be non-toxic, non-immunogenic and cleared from the body after a certain period of time,’ he explains.

‘One of our ultimate goals is to develop a universal drug carrier useful in targeted drug delivery using such stimuli-responsive polymer nanocapsules with a versatile surface modification capability,’ says Kim. ‘This work is a first major step toward this goal.’