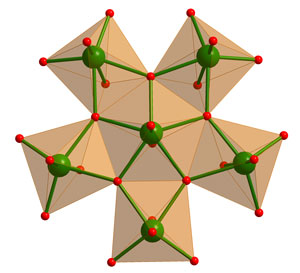 Keplerates are compounds that have one central point, the barycentre (either occupied by an atom or left vacant), around which spherical shells of atoms forming Platonic and/or Archimedean solids are found. Keplerates have received a lot of attention in the literature due to their beautiful spherical structures and in some cases because of their magnetic properties. Müller and his co-workers wanted to investigate whether they could tune the magnetic properties and the Keplerate surface by replacing pentagonal molybdenum-oxide with tungsten-oxide units.

Müller’s fascination of pentagonal units stems from history ‘as they play an important role in Pythagorean times, but also in mathematics (with reference to Kepler and Penrose), in architecture (the geodesic domes of Fuller) and in different areas of science (like in the case of fullerenes and quasicrystals). In the well-known biochemistry textbook of Voet-Voet a geodesic dome together with the model of a spherical virus emphasizes the central role of the twelve pentagonal units in both of them; also the football and the well-known C60 molecule contain these’ explains Müller. But whereas, for instance, in fullerene chemistry, pentagonal units cannot be directly applied as building blocks, this is possible in the present type of chemistry which makes these Keplerate structures even more intriguing. Presently, Müller and his team have successfully shown that the spherical Keplerate structure can be maintained by exchanging the molybdenum-oxide with tungsten-oxide based units both linked by magnetic ions, realizing the desired change of magnetic properties. The present spherical structure with its pores is also an attractive host for cations.

‘The message of the present communication is that different types of pentagonal metal-oxide based units and linkers can be used for the syntheses of a variety of spherical molecules, thereby changing their properties deliberately. As these building blocks can be obtained according to a logical method based on stimuli, this allows to follow systematically new routes in chemistry and materials science. As the stimuli acting as linkers can be magnetic centres this has also perspectives for molecular magnetism and for modelling with the mentioned Keplerate the important Kagomé lattices showing the same type of magnetic frustration. Furthermore, the option of molecular modelling of important metal-oxide surfaces might be an interesting aspect for heterogeneous catalysis,’ says Müller.